It’s not ‘kids in cages,’ Biden White House insists, saying it uses ‘facilities’ with ‘Covid-safe’ standards to lock up children 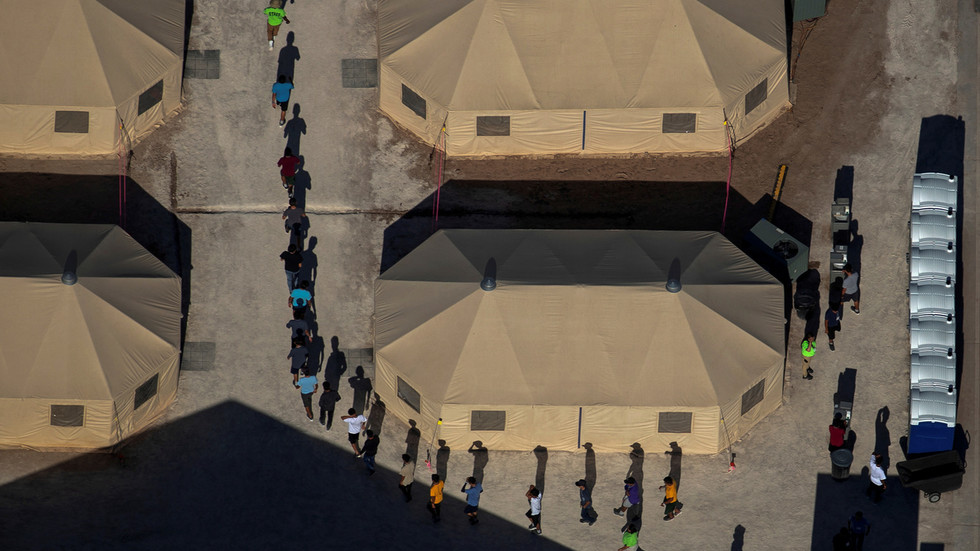 White House Press Secretary Jen Psaki has recast the reopening of one of ex-president Trump’s infamous migrant detention centers as a temporary fix for the pandemic, arguing that not locking kids up would be “inhumane.”

Psaki was skewered by reporters on Tuesday after the Biden administration reopened a migrant detention facility that had been closed in 2019 under former president Donald Trump.
The press secretary floundered as she attempted to defend Biden’s stated policy “not to expel unaccompanied children who arrive at the border” by putting those children back in the “cages” – actually shipping containers – he had so vociferously denounced when they were used by his predecessor.

Peter Doocy, one of the few remaining real journalists out there puts Jen Psaki in a tough spot by repeating back to her Kamala Harris’s own words.Psaki: “This is not kids being kept in cages.”These people have no shame. pic.twitter.com/1yppZdTGTA

“This is not kids being kept in cages,” Psaki insisted, arguing “this is a facility that was reopened that is going to follow the same standards as other [Department of Health and Human Services] facilities.”

It is not a replication. Certainly not.

Psaki then emphasized that “That’s never our intention – of replicating immigration policies of the past administration. But we are in a circumstance where we are not going to expel unaccompanied minors at the border. That would be inhumane.”

Her explanation begged the question of which is less humane, given that Biden and his running mate Kamala Harris had rushed to cast Trump’s use of the same facilities in 2019 as a “human rights abuse being committed by the United States government.”

Harris especially accused Trump of having “pushed policies that’s been [sic] about putting babies in cages at the border in the name of security.”

Thus caught between a rock and a hard place, Psaki stressed that “there is a pandemic going on,” suggesting that justified the reopening of the Texas facility – since the Office of Refugee Resettlement, the kids’ final destination, can no longer house as many people due to Covid-19 space restrictions.

Rather than detention, the facility’s reopening was all for the safety of the immigrant teens, Psaki claimed, insisting that “we are in a circumstance that we are not going to expel unaccompanied minors at the borders” and “the administration very much feels that way” – that is, opposed to turning incarcerated migrant minors loose at the border.

“We need to find places that are safe under COVID protocols for kids to be, where they can have access to education, health and mental services, consistent with their best interests,” she said.

While a handful of Biden supporters had rallied to Psaki’s aid on social media, suggesting the shipping-container cells were a step up from “cages” because they offered privacy, they avoided addressing the issue that those facilities had offered the same “privacy” under Trump, back when they were denounced as human rights violations. More clear-eyed Democrats and migrant advocates, on the other hand, slammed the reopening of the 700-child facility as “absolutely against everything Biden promised he was going to do.”

Also on rt.com ‘The containers offer privacy!’ Biden under fire for opening child detainment center, but some liberals jump to defend him