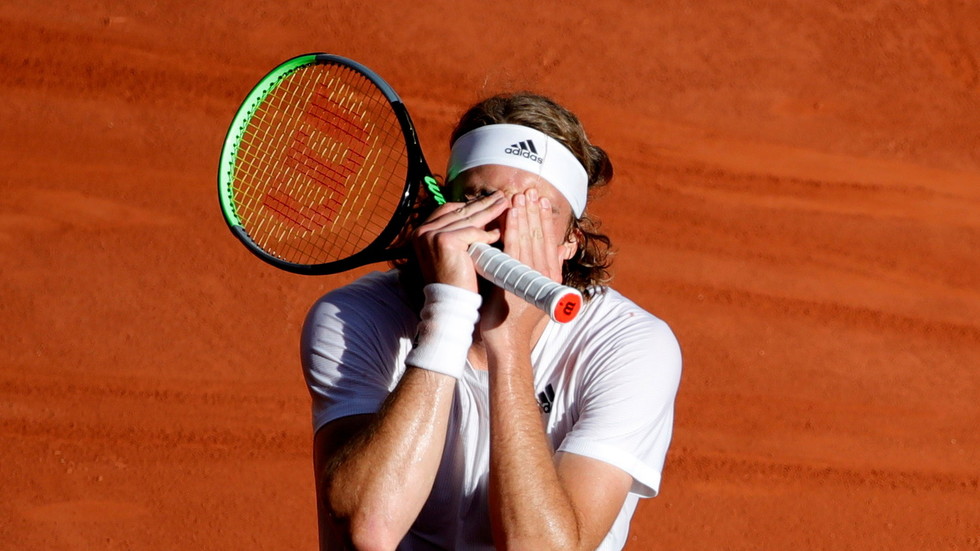 Stefanos Tsitsipas, 22, couldn’t restrain his tears after he reached his first-ever Grand Slam final at the French Open on Friday after he bested Alexander Zverev in a five-set thriller.

Tsitsipas will become the first Greek player to ever play in a Grand Slam final when he faces the winner of Friday’s second semi-final between Novak Djokovic and Rafael Nadal on Sunday, after he held off a brave fightback from Germany’s Zverev to win the final set by a score of 6-3, advancing him to the biggest test of his career this weekend.

Despite losing all three of his prior Grand Slam semi-finals, the steely Tsitsipas remained calm in a tense final set in which he missed out on four match points before serving out to win.

After securing his win with an ace on his fifth match point, Tsitsipas triumphantly raised his arms into the air to celebrate his win – and embraced Zverev at the net before taking his seat at courtside.

It was clear what the victory meant for Tsitsipas, but when it came time for him to express his emotions after qualifying for Sunday’s final the Greek player couldn’t restrain his tears.

Tsitsipas had looked to be in command after winning the first two sets by a score of 6-3 before Zverev fought back in the following two sets, winning both 6-4.

But as the audience of 5,000 people – and perhaps Tsitsipas himself – began to sense yet another Grand Slam semi-final disappointment, he once again took control in the decider.

“Well, it was nerve-wracking, it was so intense,” explained Tsitsipas afterwards.

“The first game of the fifth set was so important. I came back from three breakpoints down, I had the crowd with me, they were cheering me on.

“I still had hope, I knew I could fight and make something happen, so that’s what I did. I went through many phases in this match, almost had an emotional breakdown, but this win means the most for me.

“This is probably the most important win of my career so far. There were a lot of people in the crowd and in Greece who were cheering me on.

Also on rt.com ‘He should be EMBARRASSED’: Madcap Medvedev ripped for botched underarm serve on match point in French Open defeat (VIDEO)

“It’s very important to have these people in and around me. I want to do more, to be recognized more in the country.

“I think Greece is a bigger part of the tennis community now, and I think both me and Maria Sakkari have been doing all we can to keep Greece improving in this sport.“

Tsitsipas will now have a day to recover ahead of Sunday’s final where a tough test will await him either in the form of top seed Djokovic or Rafael Nadal, the defending champion who is seeking an incredible 14th career French Open title.