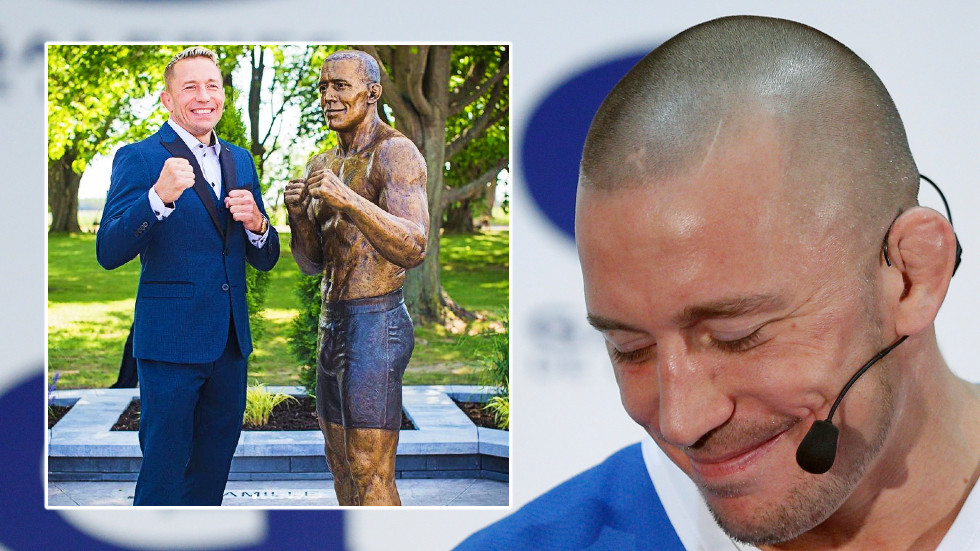 MMA fans have ridiculed a statue unveiled in honor of UFC legend Georges St-Pierre after the fighter was pictured next to it in Canada, with many voicing their surprise at what they thought was a recreation of Barack Obama.

In a response that evoked memories of the reception once given to a confusing statue that was supposed to show football superstar Cristiano Ronaldo, readers did not quite share the admiration for the work that it initially received after being highlighted by a page for UFC Quebec.

Reproducing the photo of the 40-year-old former welterweight champion posing with his supposed likeness, heavily-followed MMA journalist Ariel Helwani, who hails from the same Francophone city of Montreal as GSP, wrote: “This is incredible. Bravo, Georges.”

But not everyone agreed with the quality of the tribute, with plenty preferring to poke light-hearted fun at it.

“Georges got to meet the Bicentennial Man. Sick,” said one wise-cracker, in reference to the 1999 Robin Williams box office flop.

“Why does GSP’s statue look like Barack Obama?” another asked, mentioning the former US president.

“Why is my guy standing next to an Obama statue?” posed another punter who had spotted the unwitting resemblance.

“That statue looks anything but GSP,” said a harsher critic.

The grappler himself was evidently thrilled, writing on Instagram: “I am very moved by this honor that the municipality of my childhood has bestowed on me.

“I hope that Place GSP will be a space for inspiration and encounters for every generation and a symbol of perseverance, especially for young people who have big dreams.”

Many a respected figure in the sport chimed in, including ex-middleweight king Chris Weidman and current heavyweight ruler Francis Ngannou, who wrote in French: “[I’m] very happy for you, my brother.

“The Place GSP will undoubtedly be a symbol of perseverance and especially of determination, because GSP in itself is a symbol of faith and hope for this generation and the future generation.”

“That should’ve been done a long time ago,” quipped one fan, calling St-Pierre the greatest martial artist of all time.

But a football supporter drew comparisons to a horrific bust once made in tribute to Portuguese icon Cristiano Ronaldo.

Put up in the airport in his home island of Madeira, Ronaldo spoke proudly of his homeland at its unveiling.

Later disposed of to calls of “RIP Legend”, its creator, Emanuel Santos, claimed that – akin to GSP – Ronaldo was an admirer of his homage and “only asked for some wrinkles to be changed that give him a certain expression in his face when he’s about to laugh.”

“No negative comments have reached me yet,” he said at the time. I’ve got friends on Facebook and the feedback has been positive,” Santos insisted.

“Of course there’s the odd comment from someone saying there’s room for improvement here or there. But it’s complicated and the end result is never going to please everyone.”