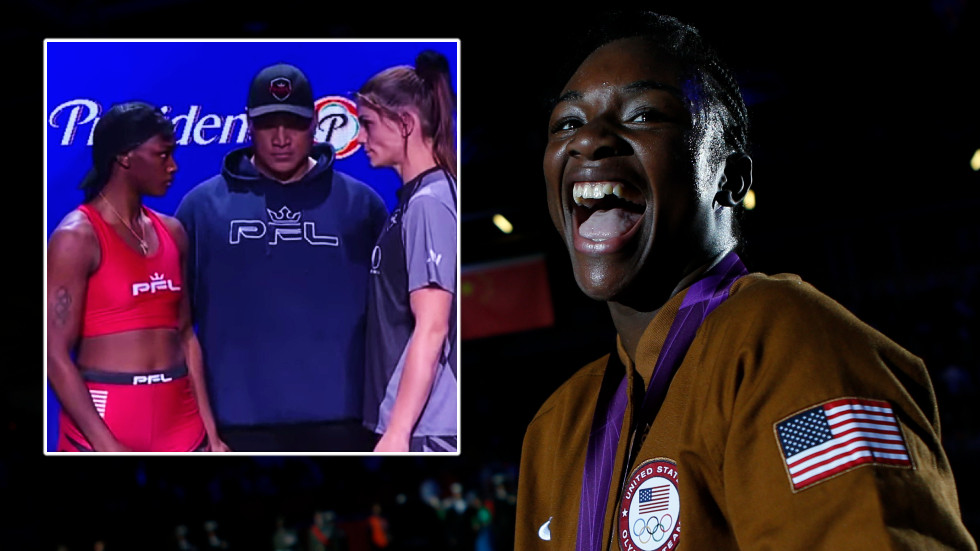 Multiweight boxing champion Claressa Shields has again compared herself to Muhammad Ali ahead of her Professional Fighters League MMA bow, comparing the two sports in between savaging opponent Brittney Elkin after their weigh-in.

Never low on confidence, Shields was somber at the weigh-in as she made her way to the scales but then let off a thunderous growl while beating herself down to then face Elkin in a martial arts pose.

Having spent seven months training with the likes of former UFC champions Jon Jones and Holly Holms, Shields was on characteristically brash form in the ensuing press conference.

“She doesn’t sound confident in anything she’s saying,” she said of Elkin, who has lost six of her nine fights but has considerably more experience than Shields.

“First it was going to be 15 seconds, now it’s going to be the second round. The truth is, Brittney Elkin is going to lose, period. I didn’t come to the PFL just to have my beautiful record in boxing be taken by someone who is not even a serious fighter.

“Don’t count me out just because Brittney has been in MMA for 12 years and hasn’t been great at anything except jiu-jitsu. I’m a great athlete, a great person and I’m just looking forward to getting in there and shutting up all this stuff about grapplers being able to beat boxers because I’m an MMA fighter now.”

After the initial shock of grappling in sparring, Shields now says she can bounce around like the legendary Ali and expects to be the “exception” who becomes a champion within a year.

“Boxing is apples: you rinse it off, you bite it and you eat it,” she hypothesized in front of the media as Elkin largely kept her counsel.

“MMA is like an orange…it’s really like a grapefruit: you’ve got to peel it and peel it again to get the fruit. MMA is so much more complex.

“Boxing and MMA is all about war: me versus you, man versus man, woman versus woman. Can’t nobody help you in there.

“I started off in June and I was only able to bench 135, which I could do in the ninth grade. So my boyfriend, who is my strength and conditioning trainer, started getting me together.

“Now I can bench 135 ten times and 185 one time. I’m stronger and have better control over my diet.

“Boxing and MMA are two different sports but they always compared me to Amanda Nunes or Ronda Rousey. Those girls were great MMA fighters but if they came to boxing, I would beat them.

“I was like, ‘maybe you should get to the point where you can beat them in MMA. That would be much bigger.’

“There are some things in MMA that I like and don’t like. At the start, I didn’t like any of it. I can say now that I agree the wrestling part, kicks and seeing when kicks are coming.

“Now when I spar, I don’t feel helpless at all because I know what to do. You won’t recognize me at all on Thursday.”

Shields has admitted that she needs to avoid becoming involved in Elkin’s “game” when they meet in Atlantic City – her opponent is a brown belt in Jiu-jitsu.

“It would just be a dream to cause an upset, so I’m excited,” said Elkin. “She always talks like that, so it doesn’t bother me.

“I’m very confident too – I just don’t use as many words to explain myself. I just let it go because I want to show what I can do in there, and I need to say less to do that.

“I don’t feel offended at all: I feel that everybody putting the attention on her has just let me slide in and get to work.”

Now the world is about to find out whether Shields can transfer her class as a double Olympic champion and the only female athlete to be an undisputed queen in two different weight classes over to a new discipline.

Also on rt.com ‘98% of men in the world can’t beat me’: Claressa Shields declares she’s the second greatest boxer of all time behind Muhammad Ali