Ukrainian plan for new ‘race law,’ which refuses to recognize Russians as ‘indigenous people,’ has echoes of Hitler, Putin warns 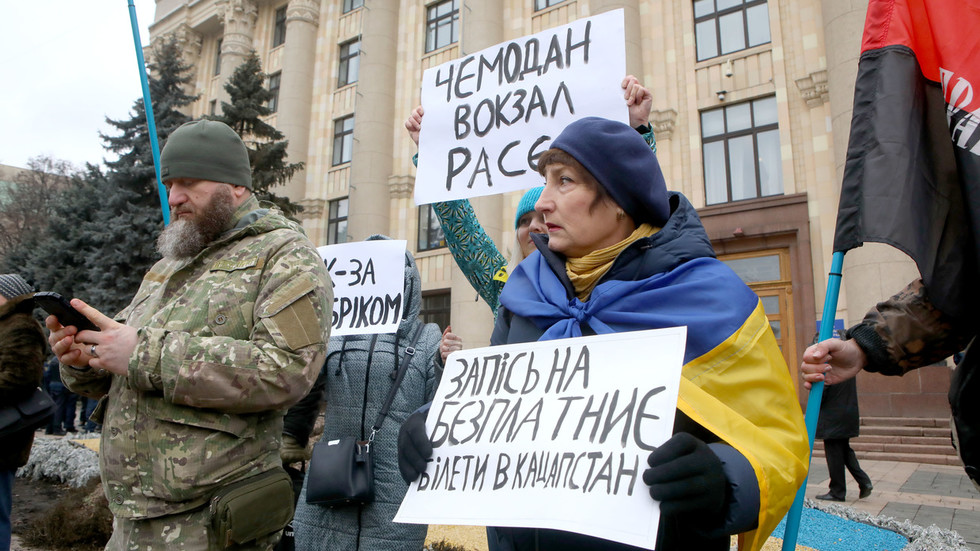 Russian President Vladimir Putin has blasted a controversial new bill under consideration by lawmakers in Kiev, which critics say would stoke ethnic tensions and deprive millions of residents of important rights if it is passed.

The draft law, which aims to define the “indigenous peoples of Ukraine,” was introduced by the country’s president, Volodymyr Zelensky, in April. As well as elevating the status of ethnic Ukrainians, it recognizes the status of some minority communities, including Crimean Tatars, Karaite Jews, and Krymchaks. However, it excludes those whose ethnic group is deemed to have its own state elsewhere, depriving those descended from Belarusians, Moldovans, and Poles of the right to be considered indigenous, despite centuries of history in Ukraine.

Asked for his view on the bill as part of an interview with the Rossiya 24 news channel on Wednesday, Putin said it was “of course, negative,” and argued that “to speak of Russians as a non-indigenous people is simply incorrect. This is ridiculous and stupid.” He added that “the division of people into indigenous – first-class – and second-class categories of people and so on – it definitely looks like and resembles the theory and practice of Nazi Germany.”

“What about people with mixed blood?” Putin asked. “Zelensky himself is Jewish by background… what to do with these people? They’re going to, like in Nazi Germany, measure their skulls and other parts of the body with a compass? Are they going to define ‘real Ukrainians’ in the same way ‘real Aryans’ were defined?” the president asked incredulously.

Zelensky’s bill introduces protections for recognized indigenous groups, which it says are “aimed at preventing the deprivation of ethnicity, assimilation, forced resettlement and discrimination.” According to Putin, however, “there is a general legal rule that means everything that is not expressly prohibited is allowed. Indigenous peoples cannot be discriminated against, but non-indigenous peoples can? Including the Russians?” he suggested.

The proposals have drawn strong condemnation in Russia, with Foreign Ministry spokeswoman Maria Zakharova declaring earlier this week that “passing these kinds of marginal laws strengthens Ukraine’s nationalist and neo-Nazi inclination,” and warned that millions would be affected by its provisions.

Given the current state of tensions in the predominantly Russian-speaking east of the country, where clashes between Kiev’s forces and troops loyal to two self-declared People’s Republics, there are concerns that the indigenous peoples bill will only further inflame hostilities and make reconciliation impossible.

Likewise, Ukraine is currently grappling with a debate around the history of wartime genocide of ethnic minorities, including millions of Jews and Poles. Once sizeable communities in the country, their populations were decimated at the hands of nationalist militias that fought alongside the Nazis. Now, a slogan that rose to prominence as one such group’s rallying cry – ‘Glory to Ukraine, Glory to the Heroes’ – has been emblazoned on the official football shirts to be used by the national team during the upcoming Euro 2020 competition.