Ronal-DOH! Cristiano roasted for ATROCIOUS free-kick… but goes on to score as Portugal rout Israel in final Euro warm-up (VIDEO) 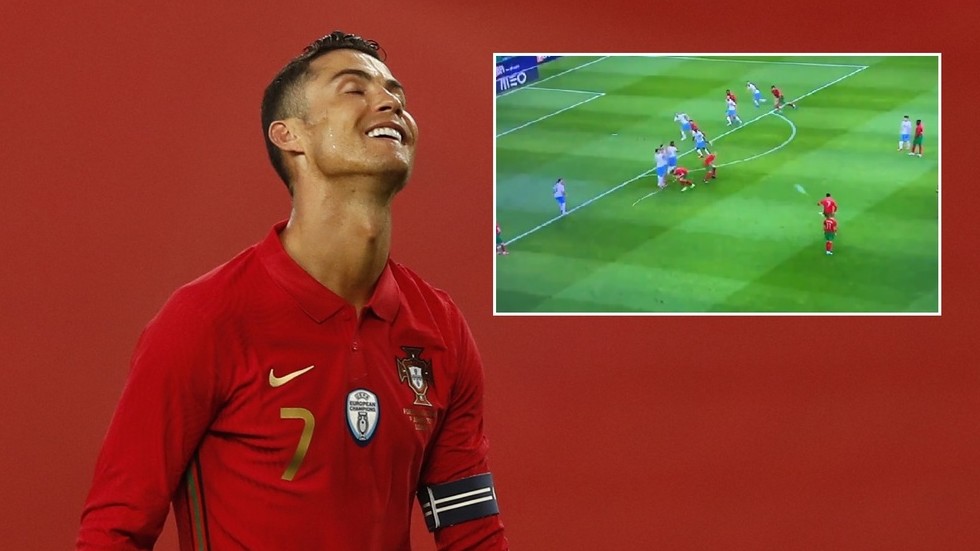 Cristiano Ronaldo’s woeful free-kick provided a moment of viral humour but the Portugal star recovered to get himself on the scoresheet as Portugal warmed up for Euro 2020 with a win against Israel.

Playing their final game before they begin the defence of their European title, Portugal recorded a routine win in Lisbon thanks to a double from Bruno Fernandes and goals from Ronaldo and Joao Cancelo.

But before Fernandes opened the scoring in the 42nd minute, Portugal skipper Ronaldo was presented with a chance of his own as he lined up a free-kick around 25 yards out.

Adopting his trademark pose, CR7 took aim before blasting off his effort – only to skew the ball embarrassingly into Row Z at the Estadio Jose Alvalade.

Fans perhaps don’t get the chance to gloat at the misfortunes of a five-time Ballon d’Or winner all that often, and gleefully seized on the clip online.

“Greatest free-kick taker of all time,” goaded one Twitter user, while others posted various memes mocking the flight path of Ronaldo’s errant attempt.

I was having a nice nap on the couch during the first half of the Israel vs Portugal game, when I was suddenly startled awake by gunshots on TV. At first I was confused, then I realized the noise was just Penaldo’s free kick bouncing off the stadium stands. Keep it down Penaldo!

Thankfully for Ronaldo the woeful strike didn’t prove costly, as Manchester United playmaker Fernandes opened the scoring not long after when he put away a Cancelo cut-back.

The finish from Ronaldo was number 104 for his country, edging him closer to the all-time record international haul of 109 goals by Iranian great Ali Daei.

Since turning 30 years old, Cristiano Ronaldo has scored 50 goals for Portugal. That would place him 2nd in the all-time goalscorers list for Portugal. Deep how crazy that is, he’s competing with himself.

Portugal continued to dominate in Lisbon as they racked up 24 shots, but only extended their lead in the 86th minute when full-back Cancelo cut inside from the right flank and curled a left-footed effort into the bottom corner.

Fernandes then added his second in injury time – and his fourth goal for the Selecao – with a superb strike from the edge of the area.

The warm-up win hands Fernando Santos’ men a lift as they head into Euro 2020’s ‘Group of Death’.

Portugal open their defence against Hungary in Budapest on Tuesday, before a trip to Munich to face Germany on June 19 and a concluding Group F game with France back in Budapest on June 23.