‘I’ll let him know what I want him to know’: Biden shoots ‘warning’ at Putin ahead of meeting 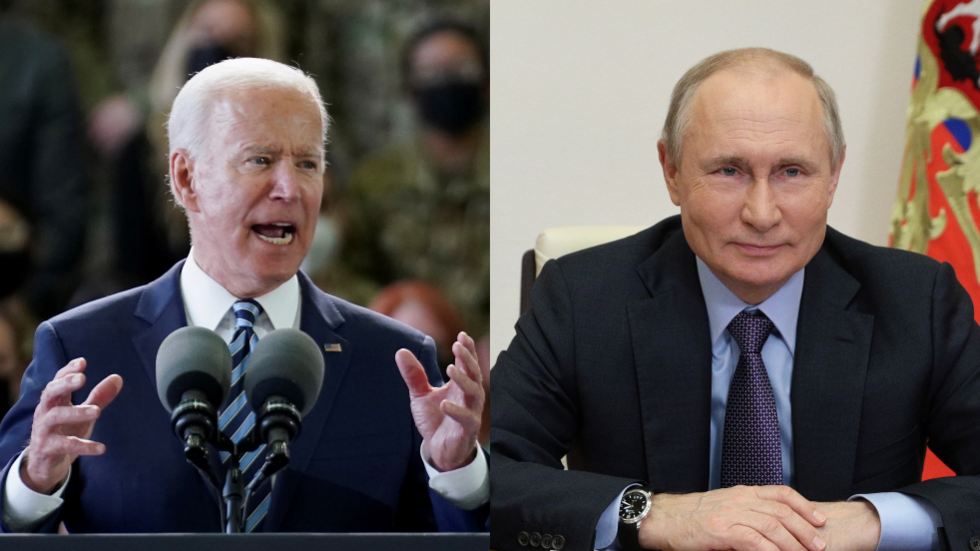 In a statement construed by some as a “warning,” President Biden kicked off his first foreign trip as US leader by announcing that he was heading to meet Russian President Vladimir Putin to “let him know what I want him to know.”

Biden touched down in the UK on Wednesday, ahead of a meeting with Prime Minister Boris Johnson on Thursday and the start of the G7 summit on Friday. His schedule in the coming days is a busy one. From the G7 in Cornwall, Biden will travel to Brussels for a NATO summit and then to Switzerland in a week’s time to meet his Russian counterpart.

It’s the latter engagement that’s perhaps most eagerly anticipated by pundits and journalists. Nearly three years after the US commentariat hammered Donald Trump for apparently failing to condemn Putin vocally enough at a meeting in Helsinki, liberals in the media and lawmakers in both parties will expect Biden to take a tougher stance, after the president called Putin a “killer” and promised on the campaign trail to make him “pay a price” for alleged election interference.

Biden served them some meat on Wednesday. Speaking to a gathering of US forces in Suffolk, Biden outlined his travel plans, stating that he would be meeting with Putin to “let him know what I want him to know.”

🚨🇺🇸Video:BIDEN SENDS STRONG WARNING TO PUTIN. “I’m heading to the G7…then to meet with Mr. Putin, to let him know what I want him to know.” pic.twitter.com/3TufKRbDrn

Biden’s tough-guy declaration drew rapturous applause from the troops in attendance, and was described by many commentators online as a “warning.” Yet Biden then claimed to want a “stable, predictable” relationship with Russia, built around the “responsibilities” both powers shoulder.

“But I have been clear [that] the United States will respond in a robust and meaningful way if the Russian government engages in harmful activities,” Biden added. “I’m going to communicate [that] there are consequences for violating the sovereignty of democracies, in the United States and Europe and elsewhere.”

Biden’s invocation of “sovereignty of democracies” is standard Democratic boilerplate, and under this Biden can press Putin on a number of issues, including alleged election interference, the detention of opposition activist Alexey Navalny, and global cyberattacks. Both the former and latter have been linked to Moscow by the US media and some officials, though no evidence of Russian involvement in either has been provided.

Though Biden’s allies in the US media have portrayed the president as tough on Putin “before it was cool,” Biden has nevertheless granted his Russian counterpart one major foreign policy concession since taking office: he waived sanctions on the landmark Nord Stream 2 pipeline, allowing the project linking Russia’s natural gas fields to European consumers to finally near completion. Former President Donald Trump, despite constant accusations at home of being “soft” on Russia, stalled the project by more than a year with sanctions.

Putin in the meantime described Biden as “an experienced, balanced, and careful” man who had spent his whole life in politics, and expressed the hope that those qualities would have a positive effect on the upcoming negotiations – but said he was “not expecting anything that could become a breakthrough in Russia-US relations.”

Also on rt.com Russia ready to discuss human rights if Biden wants, but starting with arrest of protesters who stormed US Capitol, says FM Lavrov