With critics calling for the head of the Otto von Bismarck statue in Hamburg, because of the founding chancellor’s colonialist sins, city officials reportedly plan to enlist black artists to help “contextualize” the giant figure.

The German city is planning a contest to redesign the world’s largest von Bismarck monument, which towers over Old Elbe Park above the port of Hamburg. The contest will involve four public workshops featuring artists and scientists, especially those from Africa, Die Welt newspaper reported.

Also on rt.com What to do with old monuments? RT visits German museum where removed statues go to rest (VIDEO)

The Hamburg Senate wants to “contextualize” the granite monument to “show and evaluate the various dimensions” of von Bismarck, according to the report. The first Reich chancellor was one of many historical figures targeted for attack in recent years, especially when the Black Lives Matter protest movement spread internationally following the May 2020 killing of George Floyd in Minneapolis police custody. 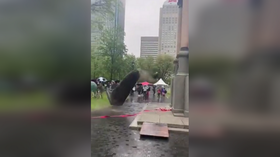 Von Bismarck has been posthumously pilloried by critics because of his role in German colonial policy, as well as tendencies that Die Welt called “anti-democratic” and “militaristic.”

Self-described leftist and retired Lutheran pastor Ulrich Hentschel has called for the statue’s 1.83-meter head to be removed and carted away in a horse-drawn carriage, just as it was brought in when the monument was built in 1906.

“There is no point in putting up a few explanatory boards in the catacombs,” Hentschel told Germany’s NDR last year, arguing against merely adding information to the display to provide a balanced historical portrayal. He added that Bismarck’s policies were based on “the violence of the sword, and this sword meant death for hundreds of thousands of people in Poland, France and later in the colonies.”

Growing controversy over displays of historical figures who fail to measure up to modern standards of political correctness was evident last year, when a smaller – and presumably, more accessible – von Bismarck statue in another part of Hamburg was vandalized with red paint.

The 625-ton granite von Bismarck monument in Old Elbe Park stands more than 34 meters high, including nearly 15 meters in the statue itself. The sword that von Bismarck holds in front of him with the tip on the ground is eight meters high.

Renovation work started in 2019, and cleaning of the statue has already been completed. The Hamburg Senate plans to begin the redesign in late 2021 and to employ a diverse jury to judge the entries.