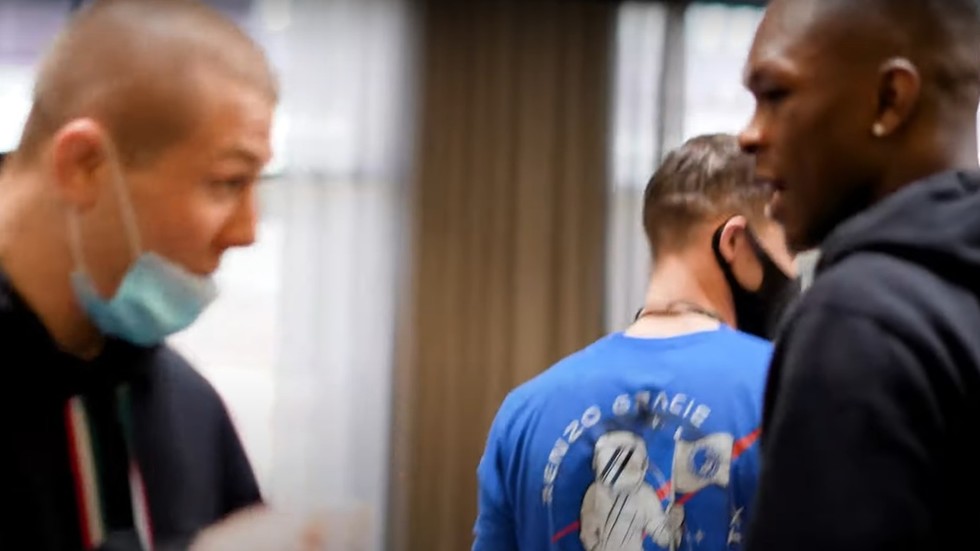 UFC middleweight champion Israel Adesanya and challenger Marvin Vettori were involved in a chance confrontation caught on camera as they crossed paths in an Arizona hotel ahead of their showdown at UFC 263.

EMG Access shared the footage as the two men met, having last fought in an April 2018 showdown which Adesanya won by split decision in the same city of Glendale.

Back then, ‘The Last Stylebender’ was still a further four wins away from the title shot he won against Rob Whittaker via a stunning KO.

But now as champion with two successful defenses, Adesanya is attempting to get his career back on track after a failed bid to become a ‘champ champ’ against light heavyweight king Jan Blachowicz last time out.

Everyone at 185lbs now wants a shot of the Nigerian-born Kiwi, and in the short exchange, his Italian opponent is seen asking: “Where’s my belt?”

“My belt,” fires back Vettori before Adesanya tries to confirm: “You got a Gucci belt, don’t you?”

“Yeah, you should get one,” Adesanya says when Vettori responds: “No belt yet”.

“I’m about to get mine. I’m getting yours, my friend,” finishes Vettori, before Adesanya declares: “You’re not getting mine. I’m not your friend.”

Later, Adesanya gave his own take on the events.

“I waved at him, and he looked petrified. He kept on looking back [at me from a distance]. I told Steve, ‘Nah, I’m not gonna do nothing to him. He’s not gonna do sh*t either.’ And then I got my Covid test, and I went to go check in, and he happened to be there,” he explained to the MacLife.

“I walked right up to him, and I shook his hand like I did with [Paulo] Costa. People think this is a game. It’s not a game. This is tactics of war. I understand this game, warfare. So I went and shook his hand, same thing like I said in Vegas. He was all smiley. And you know why? He didn’t have his crew with him.”

“If it was just me by myself and he had his mob with him, I would’ve kept the same energy. But he would’ve switched his energy and [grunts]. He knew security was there, his crew was there, [grunts], some sh*t for the camera, but I’m a civil guy. When the time for war comes, yeah, I’ll take that,” Adesanya signed off.

At the weigh-in Friday, expect tensions to increase before main event time the following evening.