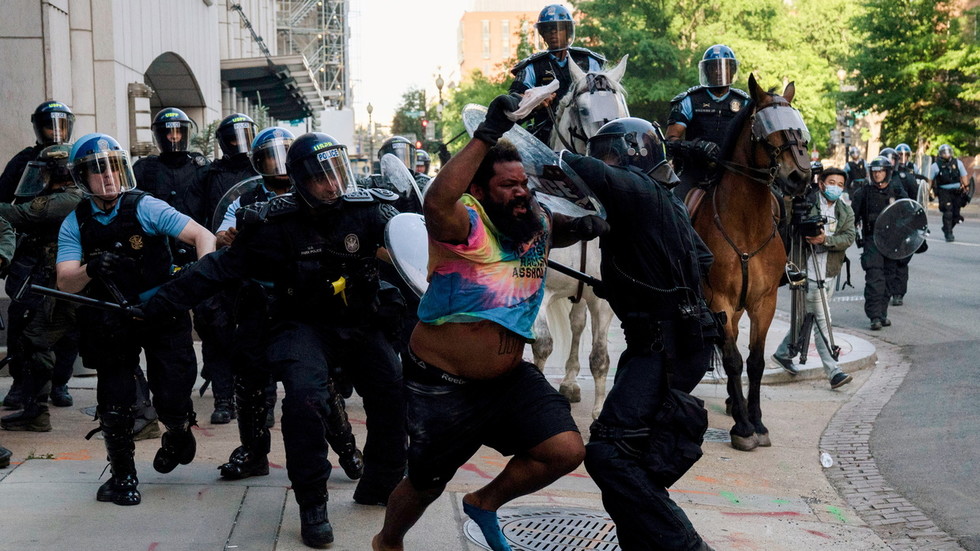 The Interior Department has concluded that the US Park Police’s crackdown on Black Lives Matter protesters at a church near the White House last year had nothing to do with Donald Trump’s photo opportunity there minutes later.

Protesters demonstrating in front of the White House last year following the death of George Floyd were forced away from St. John’s Episcopal Church in Washington with pepper spray and flashbangs. When then-President Trump strode out of the White House to the church just half an hour later to pose for a photo holding a Bible, and deliver a law-and-order speech, his opponents were outraged.

Trump denied ordering that the protesters be moved, and his supporters pointed to the fact that demonstrators had set the church on fire just one night earlier to justify the crackdown, but the outrage persisted.

Also on rt.com Trump WALKS to vandalized St. John’s Church as riot police face off with protesters in US capital (PHOTOS & VIDEO)

Now, after conducting its own internal investigation, the Interior Department has concluded that the dispersal of protesters had nothing to do with Trump’s photo opportunity.

In a report released on Wednesday, the department stated that the crowds were dispersed so that contractors could get to work installing security fencing. US Park Police “had begun implementing the operational plan several hours before they knew of a potential Presidential visit to the park,” Inspector General Mark Lee Greenblatt said in a statement accompanying the report.

The report did find that Park Police officers failed to communicate properly with other law enforcement agencies present on the day, and failed to adequately warn the protesters before the crackdown.

It also found that one agency – the Park Police – didn’t use tear gas, while Washington, DC officers and Bureau of Prisons officers did.

Compiled by the government department which oversees the agency whose officers took part in the clearance, the report will likely convince few of Trump’s critics. Even NBC’s Ken Dilanian summarized the report on Wednesday as revealing “a narrative we thought we knew is not the reality” – but reality not living up to MSM narratives has been a defining characteristic of the Trump presidency, from Trump’s supposed collusion with Russia back in 2016, to the “fine people” hoax, to the claim that Trump told people to drink bleach to ward off Covid-19, among others.

WATCH the pure pain and disappoint as NBC’s Ken Dilanian has to admit that the decision by Park Police to clear LaFayette Square of BLM protesters on June 1, 2020 was *NOT* so Trump could go to St. John’s: “A narrative we thought we knew is not the reality.” (1/) pic.twitter.com/KWtp4O5Aet