Kante’s Ballon d’Or bid, Ukraine play politics, & will Ronaldo hold Portugal back? The alternative Euro storylines to look out for 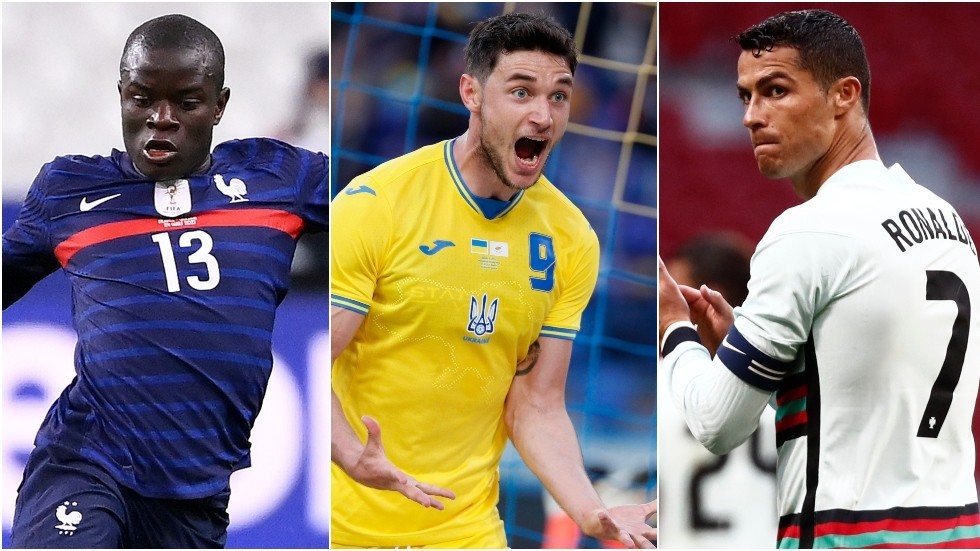 Euro 2020 is almost upon us as football fans from St. Petersburg to Seville gear up for a month-long extravaganza – but beyond the obvious questions, what are the alternative stories to keep an eye on? RT Sport takes a look…

The midfielder with the biggest smile in football has done even more to bolster his reputation this season as one of the nicest – and not to mention most effective – players in the game.

Instrumental in Chelsea’s unlikely Champions League triumph, talk has been growing that 30-year-old Frenchman would be the most worthy recipient of this year’s Ballon d’Or.

The likes of Polish hitman Robert Lewandowski might have something to say about that, but if Kante drives his nation  to success at the Euros this summer, the clamour could be hard to resist for him to scoop football’s biggest individual prize.

“I said a long time ago that it would be appropriate, if Chelsea won [the Champions League], for him to win the Ballon d’Or. It would be deserved, too,” said Les Bleus teammate Paul Pogba recently.

The Champions League is already in the bag, and a Euro triumph for France could equal individual glory for Kante – even if the diminutive midfielder would be far too modest to admit it.

Also on rt.com ‘It would be deserved’: Paul Pogba backs calls for N’Golo Kante to WIN the Ballon d’Or after dragging Chelsea to European glory

All kicking off over Ukraine’s kit

A ball hasn’t even been kicked at Euro 2020 and Ukraine have already managed to spark a diplomatic row.

The team’s new set of kits – unveiled at the weekend – features an outline of a map of the country including the Crimean peninsula as well as slogans linked to WWII Nazi sympathizers.

Given that Crimea joined Russia following an emphatic referendum result in 2014, the Ukraine gear has not gone down well in Moscow – where politicians and other figures have claimed football is being used to provocatively push political agendas.

The Russian Football Union has formally written to UEFA, which apparently approved the kit.

So could the drama spill over onto the pitch?

Drawn in different groups, Russia and Ukraine can’t clash (in football terms) earlier than the quarter-final stage, assuming they get that far, and even then that match would be played in Baku or Munich.

But under a different scenario, Ukraine could find themselves in a quarter-final being played in St. Petersburg – in which case UEFA has said it would not change the venue.

While Russia and Ukraine might not meet on the pitch, but away from the football field the kit row is likely to rumble on throughout the tournament.

England getting booed by their own fans

Another major tournament, and yet again England expects.

Euro 2020 is practically like a home competition for the Three Lions, with each group game – against Croatia, Scotland and the Czech Republic – being played at Wembley. The semi-finals will also be held at the iconic London venue, as will the final.

So England can count on some fervent home support, right? Well, not exactly…

The team was booed by some sections of fans as players took a knee before the recent warm-up games against Austria and Romania in Middlesbrough, as disgruntled supporters made their anger clear over a gesture associated with the Black Lives Matter movement.

England boss Gareth Southgate has penned a schmaltzy open letter to fans on the eve of the tournament, asserting players’ rights to make a stand (or rather, take a knee) for what they believe in – which has gone down a stormer with the liberal press.

But Sunday’s opponents Croatia have apparently said they won’t be joining England in the gesture, and St. Gareth’s plea for fans to back the team might fall on some deaf ears among the Three Lions faithful.

Also on rt.com Ex-Man United captain Ferdinand: Black Lives Matter kneeling is ‘nothing to do with politics’, there’s ‘no valid reason’ for boos

How much do Portugal need Cristiano Ronaldo?

The 36-year-old Cristiano Ronaldo heads into Euro 2020 as a bona fide legend at the tournament.

No other player has scored at as many editions of the Euros (four), and should he bag this summer, Ronaldo will move beyond Michel Platini as the outright top-scorer in the history of the competition (both men are currently on nine goals).

There is also the small matter of CR7 chasing the all-time international goals tally, as he lies just six short of Iranian icon Ali Daei’s haul of 109 strikes.

But – and don’t mutter this within earshot of any Ronaldo fanatics – it has been suggested that Portugal might be better off without their captain and all-time top scorer.

It has been put to Portugal boss Fernando Santos in recent months whether his team looks more fluid when their skipper isn’t involved.

“In Ronaldo’s absence, Portugal play in a more relaxed and uncomplicated way, especially because there isn’t a reference around who is actually bigger than the team,” football pundit Tomas da Cunha has said.

“The pieces fit together naturally. With Ronaldo, the rest of the players seem to have their decision-making unconsciously affected by the need to pass the ball to him.”

According to the argument against Ronaldo, such is his awe-inspiring and all-consuming presence, teammates feel forced to channel their attacks through the star – perhaps making them more predictable.

After a run of scoring in seven straight internationals, Ronaldo has netted just twice in his past nine games for Portugal, with those goals coming against Andorra and Luxembourg.

In that period, he’s failed to find the net against more challenging opposition such as France, Spain and Croatia.

The same case has been applied at club level, where despite finishing the season as Serie a top-scorer with 29 goals in 33 games for Juventus (six of which were penalties), some have pondered whether the Turin giants might be wise to offload him one year early this summer.

Those calls only grew after Juve hammered Bologna on the last day of the season to secure Champions League – while Ronaldo watched the entirety of the match from the bench.

The star number seven was forced to watch on from the sidelines of Portugal’s greatest triumph at Euro 2016 after going off injured in the first half, famously being left to cajole the team from the sidelines.

If things don’t go his way this summer, expect to see plenty of pouting and hands-on-hip gestures – and more suggestions that Portugal might be better off negotiating a ‘Group of Death’ containing France, Germany and Hungary with CR7 sitting some of it out.

Covid chaos – for fans and players

Holding a 51-match tournament across 11 host cities during a pandemic – what could go wrong?

Nothing, or at least that’s what UEFA is hoping as it keeps everything crossed for a successful summer.

But the logistical challenges for fans and teams means that there are bound to be a few hiccups along the way.

Supporters hoping to travel to games outside their home countries will be faced with an array of differing entry requirements – from the relatively free regime allowed by Russia, to the more restrictive measures adopted by the likes of Denmark.

That won’t stop thousands of hardy souls schlepping across the continent, but be prepared for a few stories of dejected fans getting turned away at borders for not having their documentation in order.

And then there are the players…

Spain’s plans have already been thrown into disarray after Sergio Busquets tested positive for Covid. The La Roja skipper will now miss their opening game against Sweden on June 14.

No other positive tests have been reported, but Spain have still been forced to create ‘bubbles’ within the squad and had to field an under-21 squad for their final friendly against Lithuania on Tuesday.

As the tournament rolls on, just one Covid test could cause chaos for teams if players are forced into isolation.

Staying virus-free could be just as important as performances on the pitch.