Why are Ukraine’s Euro 2020 shirts causing such anger & how are they connected to WW2 Nazi collaborators & Holocaust perpetrators? 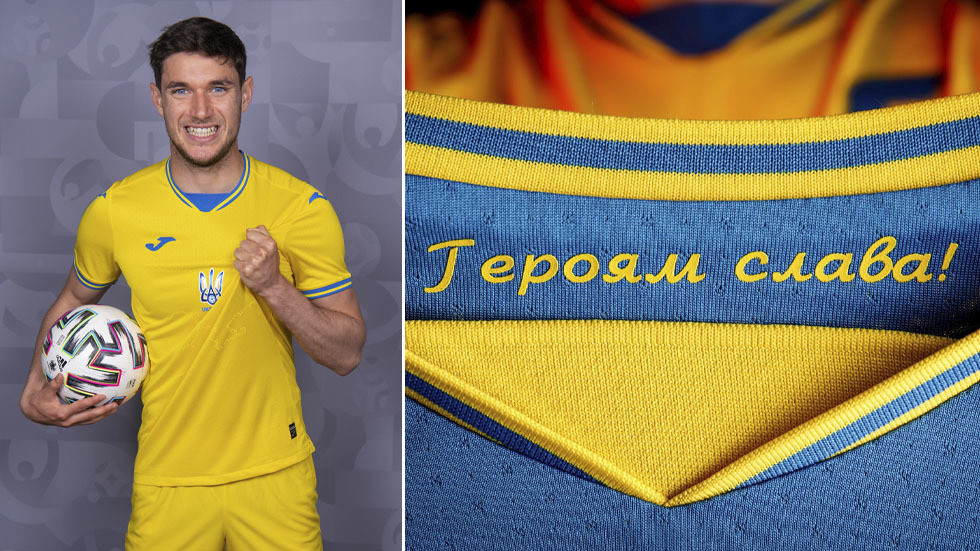 By Tarik Cyril Amar, a historian at Koç University in Istanbul working on Russia, Ukraine, and Eastern Europe, the history of World War II, the cultural Cold War, and the politics of memory. He tweets under @tarikcyrilamar.

Ukraine’s national soccer team has new jerseys. That might seem like an odd start to a fierce debate about brutal WWII-era massacres, but its new rebrand has some very old and ugly historical roots that are proving controversial.

The row comes down to the fact that their shirts are emblazoned with the words ‘glory to Ukraine’ and ‘glory to the heroes’. Given football and patriotism go hand in hand across the world, that kind of crowd-pleasing sentiment could understandably fly under the radar. Yet, in this case, it isn’t – not at all.

The problem is that the slogan has a dark history, dating back to the war. At that time, it was the rallying cry and salutation of the Organization of Ukrainian Nationalists (OUN-B), led by nationalist figurehead Stepan Bandera, and their de facto armed forces the UPA (the Ukrainian Insurgent Army).

Putting aside ongoing attempts to whitewash their bloody history, these wartime nationalists had a truly abysmal record of deliberate terror, proudly incited in their own writings before and during the war. This includes widespread violence against civilians on a massive scale, conducting ethnic cleansing campaigns against Poles and Jews, participating in the Holocaust, and killing fellow ethnic Ukrainians when they judged them insufficiently patriotic. These are facts beyond politics; they are well-established by international research and are not open to doubt. Those who still try to question them, at this point, are denialists.

What were the aims that Ukraine’s WWII nationalists pursued with such brutality? What did these men and women want for their country? The answer given all too often is independence. In fact, however, as long as the Nazis seemed to be winning, the nationalists were ready for a deal that would have made Ukraine a German client state. And that is precisely what the OUN-B pitched to the Third Reich in 1941.

If Adolf Hitler had said yes, they would in all likelihood have led a collaborating regime akin to what the Ustasha fascists did in Croatia. However, in Ukraine, they said no, and ever since we have had to listen to the claim that the nationalists opposed the Soviets and the Nazis equally. The line is designed to appeal to Cold War warriors in the West when they are looking for ways to excuse the questionable origins of the country’s nationalist movement, and it has always been historical nonsense.

Apart from being ready to serve as a Nazi satellite state, what kind of country did the nationalists want to build? The answer – again, for those who care about the historical record – is clear: authoritarian, right-wing, and illiberal through and through. They envisaged a land dominated by ethnic Ukrainians (those with the right politics, that is), thoroughly subjugating, expelling or killing all others. Academic, and sometimes probably not entirely frank, discussions continue about the question as to whether this was a variant of international fascism or not – for full disclosure, this author believes it was. But the basic features of wartime Ukrainian nationalism are crystal clear – whatever label you want to give it.

There was a rhetorical and opportunistic turn toward more ‘Western’ values in 1943, but its significance has been greatly overstated, again in convenient alignment with later Cold War needs. The fact of the matter is that the volte-face only occurred when it became clear Germany was losing the war and, crucially, did not stop the Ukrainian nationalists’ murderous ethnic cleansing of Poles.

There are those, both in Ukraine and abroad, who defend using the slogan ‘Glory to Ukraine – Glory to the Heroes’ today, as if it were harmless, even meritorious. Their arguments come in three – not always mutually compatible – versions:
1) Those Ukrainians using the slogan now do not mean it to evoke a Nazi past and instead, they associate it with new, democratic values.
2) The slogan has a longer history and variants of it have not been used exclusively by World War II nationalists.
3) The Ukrainian nationalists of World War II were fighting for Ukraine and therefore there is nothing wrong with venerating them as heroes.

But none of these arguments makes much sense: The claim that, notwithstanding their crimes, Ukraine’s WWII nationalists should be venerated uncritically, because they fought for (their idea of) Ukraine, is absurd. It implies that all perpetrators of crimes anywhere should escape criticism as long as they felt, or at least said, they were committing them on behalf of the nation. Yet, unfortunately, this position has been enshrined in Ukrainian law.

Also on rt.com Ukrainian Neo-Nazis parade through Odessa on seventh anniversary of post-Maidan massacre in which dozens were burned alive

If those Ukrainians – including those serving in the military, which has also adopted it as a chant – now claim to use this old nationalist slogan without any memory of its horrific historical baggage, then that would not be a defense, but a tragedy. Imagine a contemporary German insisting that ‘Sieg Heil’ is an appropriate thing to say today as long as you mean the ‘victory’ of democracy. If that doesn’t persuade you, because of the victims killed, hurt, expelled, and traumatized by those who shouted these slogans in a past that no one has a right to reinvent, then it can’t be right to re-define the Ukrainian version either. And those who have genuinely forgotten that history have no excuse. On the contrary, their carelessness is a mark of disrespect to those victims and their descendants.

That ‘Glory to Ukraine – Glory to the Heroes’, or similar slogans, have a (slightly) longer history is neither here nor there. As one Ukrainian historian specializing in the origins of the country’s nationalism has pointed out, the slogan became truly prominent when adopted, on occasion together with a clearly fascist right-arm salute, by the Ukrainian nationalists of the interwar period. The same nationalists who would end up as ethnic cleansers, Holocaust co-perpetrators, and, by default, Nazi collaborators only a few years later during the war.

Finally, salvaging such a slogan is anything but apolitical and cries out to be probed and critiqued instead of blindly defended. How exactly did it happen that a phrase indelibly contaminated by authoritarian ideology and mass murder was ‘resurrected’? Surely not because it would have been impossible to think of something new and better. It is not those pointing out this obvious, grave problem but those equivocating intellectuals and opportunistic politicians evading it who are to blame for the sorry sight offered so needlessly by Ukraine’s national team.

The statements, views and opinions expressed in this column are solely those of the author and do not necessarily represent those of RT.