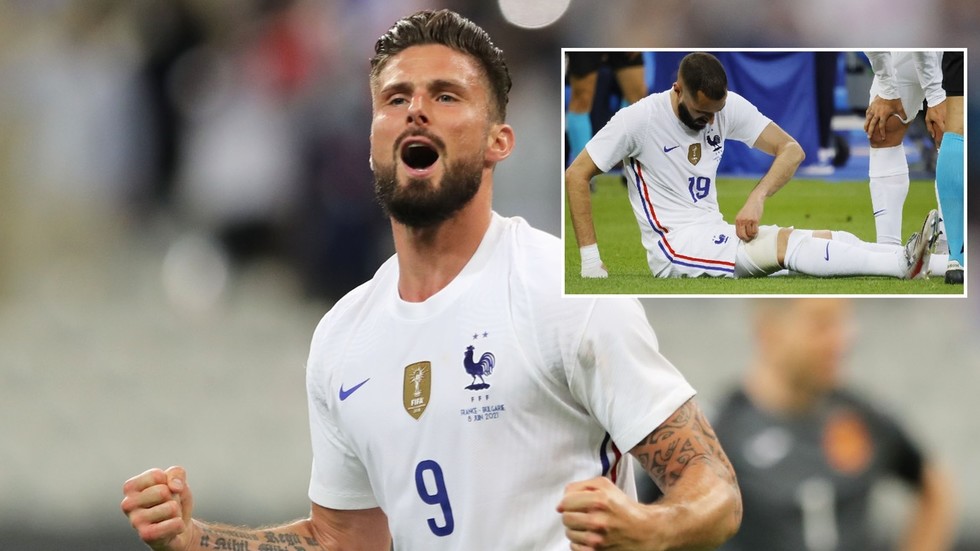 Football fans online chided Karim Benzema as the Real Madrid star, who has only recently returned to the France fold, went off injured and was then outshone by positional rival Olivier Giroud who scored a brace against Bulgaria.

In their last warm-up friendly before Euro 2020 starts at the weekend, the world champions romped home 3-0 in Paris.

With a fantastic acrobatic effort, Barcelona forward Antoine Griezmann opened the floodgates at the Stade de France through a fourth goal in his last five outings for his country.

Moments later, however, when play restarted, panic struck in for the France camp and Real Madrid star Benzema.

Dropping to the floor in pain, his evening ended with an injury that was first reported as serious by the leading sports news outlets in the Spanish capital.

Karim Benzema is only playing his second game for France since 2015. He exits their friendly against Bulgaria with an injury days before Euro 2020 kicks off pic.twitter.com/5rsf33XrXA

At full time, coach Didier Deschamps attempted to put worried minds at rest by stating his confidence in the incident not being serious.

“He took a good hit on the muscle above the [right] knee. We don’t want to take any risks,” said the former midfielder.

“It’s a knock on the knee, which also affects the muscle. He felt he was getting stiff so he asked to be subbed.

“The medical staff are taking care of him,” Deschamps confirmed.

🗣”We did not want to take risks.” France boss Didier Deschamps gave an update on the injury sustained by Karim Benzema pic.twitter.com/wL4K9uKeT0

Goalkeeper Hugo Llloris also told L’Equipe that the lesion “doesn’t look too nasty”, but before the last whistle more painful scenes played out for Benzema, who has only just returned to the national team after being banished as part of a sex tape blackmail scandal ahead of Euro 2016.

Still to face trial for the case involving former teammate Mathieu Valbuena, Benzema accused Deschamps of bowing to racists by dropping him, but their relationship was mended when the France ’98 winner made the shock decision to recall the Lyon academy product for this summer’s tournament.

“Things have changed. Me, and certainly Karim’s side too, of course,” the boss told Telefoot.

“I’m not going to tell you when, how, if it was possible before. The conditions were not met, they are today. If I made this decision, you can imagine that it was fine.”

Matters between he and Giroud are presumably still patchy, though, after Benzema made a cruel comment about the Chelsea target man while still in exile.

“You don’t confuse F1 with go-karting. And I’m being kind. I know I’m F1,” Benzema quipped in March 2020 when pushed to compare himself to the 34-year-old.

“Does everyone like that way of playing? I don’t know.“

Yet while Giroud has been a good sport by saying to Le Figaro “If we win the Euros, we will celebrate with a go-kart race“, he continues to have the last laugh.

Karim Benzema on Olivier Giroud: “You shouldn’t confuse F1 and go karting and that’s me being kind.” https://t.co/AZcTkIjizQ

Since Benzema’s shock return, he has won the Champions League with his club, while Benzema missed a penalty in his return to France action in another 3-0 win over Wales a week ago.

“Karim was unfortunate, but he was very present. A goal would have pleased him, and me too, but if he saves them for later…,” Deschamps said.

“It was an important moment for him [to play for France again]. He is part of a collective in the way he plays.”

“Good, very good,” Benzema said on his morale despite the miss.

“I had very good feelings, with a good week of work. A lot of pride and joy and desire to play and show what I did on the field.

“A match is like that, the main thing is to create the opportunities, win and do better next time.”

To pile on the misery, though, Giroud came on as a substitute to face Bulgaria when Benzema was brough off, and bagged a late brace to move within five goals of Thierry Henry’s all-time record haul of 51 for Les Bleus – the irony of which hasn’t been lost on fans online.

“Should put an end to the useless comparisons between Oli and Benzema,” one onlooker remarked.

“Man now needs [five] goals to become France’s all time number one [scorer]. Oli will always be clear of that farmer.”

“Bumzema didn’t do anything while Giroud scored two in 10 minutes,” remarked another with a string of crying emojis.

“Who is the go-kart again?,” it was also asked.

Should put an end to the useless comparisons between Oli and BenzemaMan now needs just less than 7 goals to become France’s all time no. 1 😎Oli will always be clear of that Farmer🔥 pic.twitter.com/Xwvbm1PUDJ

“Giroud [is] clear of Bumzema in my book,” stated someone else.

“So Deschamps invited Benzema just to show why Giroud starts ahead him. I guess he won’t argue again. Giroud for France is clear,” another party decided.

If Benzema is not hooked before then due to fitness, Deschamps will need to make his decision between the two when France face Germany in their Group G opener.