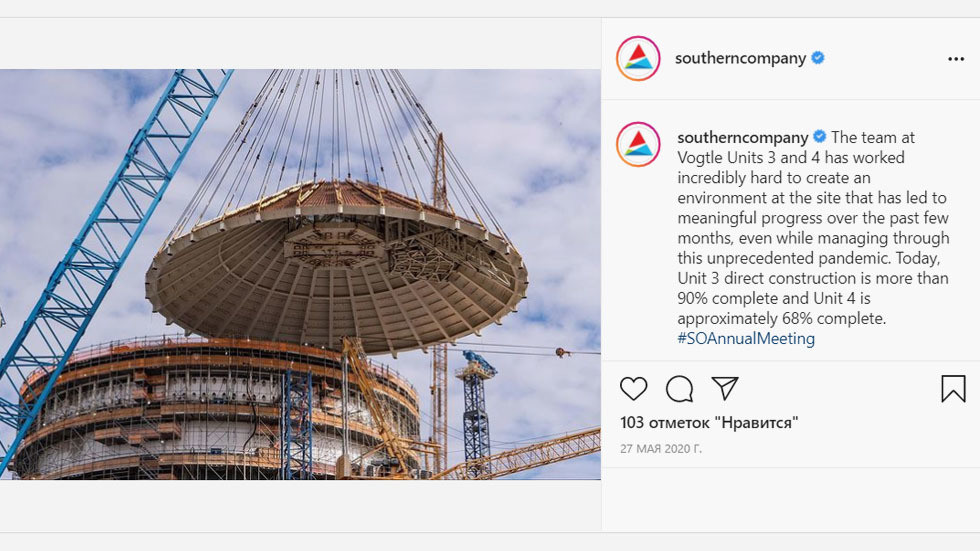 The expansion of Georgia’s Plant Vogtle, the only major construction of new nuclear reactors currently underway in the US, is unlikely to be completed on time and at the approved cost, independent oversight experts have said.

Two new reactors at the Vogtle Electric Generating Plant are not expected to be operational on schedule, the Georgia Public Service Commission has been told. The project’s approved cost of $17.1 billion is projected to rise by roughly another $2 billion, the monitors told the commission in testimonies last week, which were released to the public on Monday.

If you’ve never heard of a delay of a delay, then welcome to the world of nuclear constructionGeorgia independent monitors predict even more Vogtle nuclear delays/higher coststesting indicates “significantly more problematic” issues than anticipatedhttps://t.co/qwyzcK7U3H

The addition of Units 3 and 4 at the facility located in Burke County is supposed to make Vogtle the largest nuclear power plant in the US. Since construction started in 2009, the expansion has been plagued by delays and cost overruns and almost got canceled in 2017. At the moment, it’s the only major commercial nuclear project in the country.

The new reactor units are being built by Southern Nuclear (SNC), a subsidiary of the Southern Company gas and electric utility holding firm. The contractor insisted on redacting parts of the report to the commission to protect its trade secrets, but the sections made available to the public are still quite damning, describing a slew of problems that popped up between January and May.

The crucial Hot Functional Testing (HFT), which is currently underway, “has been significantly more problematic” than the public interest experts anticipated, based on their experience with similar projects in other countries in other countries, one of them said. The trial phase started in April, three months behind schedule, and is expected to last until early July, the monitors said.

Also on rt.com The US is losing the nuclear race to Russia and China

“Many of the problems encountered by SNC should have [been] resolved long before HFT started. Subsystems should have been adequately tested prior to HFT to ensure they would operate as required. Overall, in [the monitors’] opinion it has been an unexpectedly poor showing to date,” the report said.

Until recently, SNC said its first new reactor would be supplying electricity to customers in Georgia no later than this November and that the second reactor would be operational no later than November of 2022. Last month, the regulator was told to expect Unit 3 to become operational sometime in late December, with a second review a week later pushing the launch date to the first quarter of 2022.

The monitors expect Unit 3 to go online in the summer of 2022. Unit 4, which was energized earlier this month, may start commercial operation sometime between June and August 2023, since it “has been treated as a lower priority than” Unit 3, the commission was told.

Similar problems with ballooning costs and shifting launch schedules doomed the other major nuclear project launched in the US in this century. The two-unit expansion of the Virgil C. Summer Nuclear Generating Station in South Carolina was scrapped in 2017, four years after construction began. The reactors were originally expected to go online in 2017 and 2018, respectively. Their initial cost of $11.5 billion had grown to an estimated $25.7 billion by the time the project was closed.