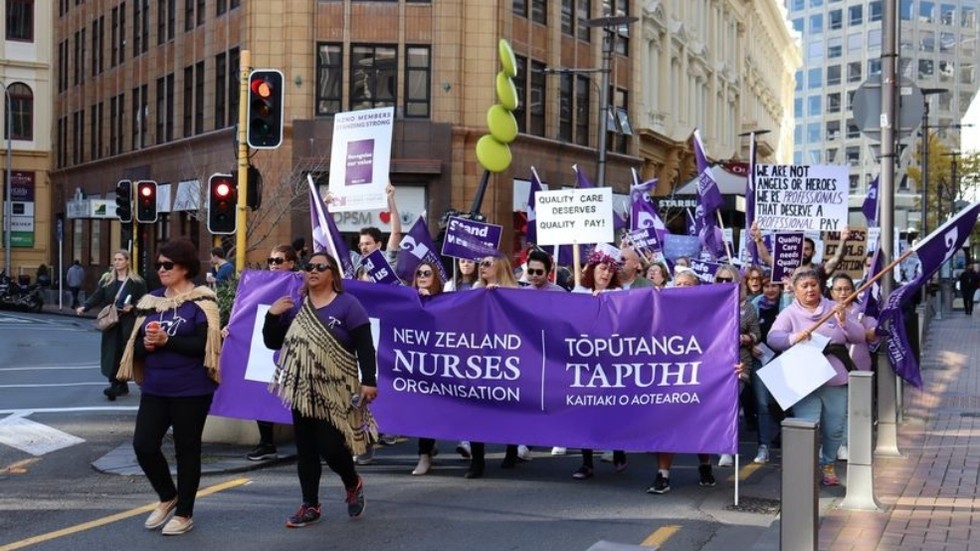 Tens of thousands of nurses have gone on an eight-hour strike across New Zealand, disrupting non-emergency health services. The union voted for the action after failing to reach a deal for better wages.

Around 30,000 nurses, midwives, and healthcare assistants walked off the job on Wednesday, marching on the streets and rallying across the country for better pay and a safer workplace environment. They carried placards saying, “Good health needs valued nurses” and “Fair wages = more nurses.”

The New Zealand Nurses Organisation (NZNO) voted for the strike, which lasted for 11am to 7pm local time, after union members failed to negotiate a deal with the government.

NZNO Lead Advocate David Wait said that members were unhappy with the “pay rates that do not attract people into the profession or retain the people we have, and staffing levels which stretch them to breaking point, putting them and their patients at risk.”

District Health Boards (DHBs) spokesperson Dale Oliff said the negotiations with the union will continue once the strike is over.

Before the action began, DHBs said the walkout would lead to some non-urgent elective surgeries, procedures, and appointments being postponed on Wednesday, but officials were confident there was enough staff. The New Zealand Herald reported that the strike has disrupted the work of Covid-19 vaccination centers as well.

Nurses across New Zealand have walked off the job today to protest a pay offer from Jacinda Ardern’s government. In Wellington they marched to parliament, where Health Minister Andrew Little could barely be heard over chants of “fair pay, safe staffing” pic.twitter.com/F3JxrWtPnc

Prime Minister Jacinda Ardern said the government was “not in the position” to agree to the union’s demand of a 17% pay increase. “In this Covid environment… we are financially constrained,” she said.

“But what we are offering makes a real effort to lift those on the lowest pay bands,” Ardern told reporters.

Also on rt.com RT’s Boom Bust looks at the battle between Amazon and its workers over better pay and benefits