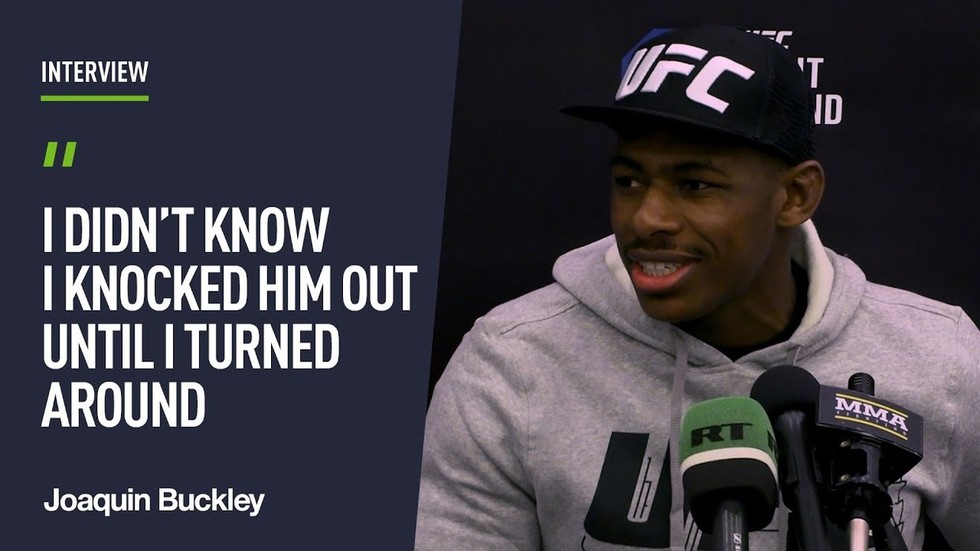 Joaquin Buckley, the man who scored the UFC’s ‘Knockout of the Year’ for 2020 in a finish that inspired Kanye West to make music, says he hopes to lock up the award for 2021 at the very first UFC show of the year, UFC on ABC 1.

American Buckley, who finished Impa Kasanganay with a devastating spinning back-kick KO last year, is targeting a similarly spectacular finish when he takes on tough Italian Di Chirico at UFC on ABC 1 on Saturday night in Abu Dhabi.

Buckley met with reporters during media day on Yas Island, and the rising star said that he has his opponent well scouted ahead of fight night.

Also on rt.com ‘Real-life ninja stuff!’ Watch and be AMAZED as Joaquin Buckley delivers one of the ‘CRAZIEST knockouts’ in UFC history (VIDEO)

“I’ve seen him fight before, with Zak Cummings, before I knew who he was,” he explained.

“It was kind of a boring fight, back and forth, but Zak Cummings ended up giving him a nice shot at the last round of the match, and it really showed that Alessio’s chin is probably very compromised, and I’m looking to show that in the fight we about to have.”

Buckley is a man looking to go places fast, and his highlight-reel knockout finish last year catapulted him to stardom, with pop star Kanye West featuring his knockout in a video that alerted even more fans to his fighting skills.

“Kanye was definitely a big impact in getting that kick out there and getting fans to even vote for me,” he said.

But now “New Mansa” is getting back to business, and he plans to score another big finish against Di Chirico as he bids to surge even further up the middleweight ranks and eventually earn himself a shot at the title in the next couple of years.

“I’m thinking of that fast rise for sure, and fighting the right fights at the right time and, in 2022, definitely having that gold belt around me,” he said.

“I gotta enjoy it. I gotta have fun with it. Me winning that award is a big deal. It was history-making. That’s gonna go down for a very long time, and people are gonna look back at that and say how amazing that moment was so for me.

“I just gotta enjoy the moment, but just not bask in it. It happened, move on to the next, and Alessio is definitely going to be on that mark for 2021 ‘Knockout of the Year.'”