No mask, no money? HSBC warns UK customers they could FORFEIT their accounts if they don’t obey pandemic rules 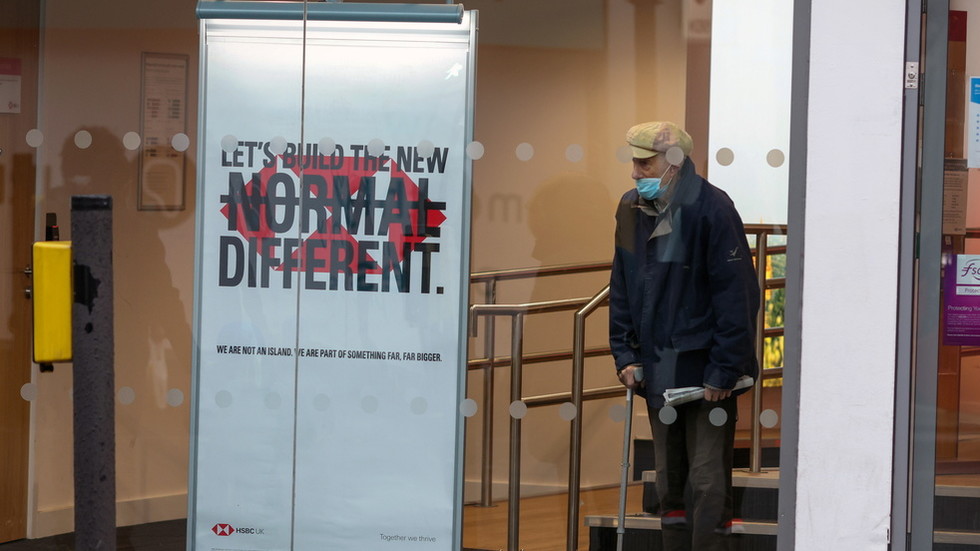 UK customers who refuse to wear masks inside HSBC branches will be refused service and may have their accounts closed, the bank says. The threat was not well-received, particularly given HSBC’s criminal history.

HSBC customers who enter a branch bare-faced without a medical exemption could forfeit their money, a spokesperson told UK tabloid the Mirror on Tuesday. The corporation’s head of branch network for the UK argued bank workers “deserve respect and should not have to face violent or abusive behavior” and encouraged customers to stay home and use HSBC’s digital banking tools rather than going out to the bank.

Also on rt.com Don’t turn the British police into Covid commissars to mask your government’s failures, Boris, or there’ll be revolt in the ranks

Most of HSBC’s main competitors, including Santander, Lloyds, and NatWest, subsequently informed customers on Wednesday that they too will not be served if they walk into a bank branch without a mask. However, of the other banks questioned by the Mirror, only Barclays explicitly affirmed its right to close accounts if customers “act aggressively towards colleagues.”

Many on social media were disturbed that a bank would threaten to abscond with customers’ money over a mask.

Seriously? We’ve come to this? We are now living in something that resembles a dark authoritarian dystopian sci-fi movie.https://t.co/wxGfGlZLCS

THIS IS WHY WE CAN NEVER EVER HAVE A CASHLESS SOCIETY. YES, I’M SHOUTING HSBC says customers who refuse to wear a face mask will have their accounts withdrawn – Mirror Online https://t.co/1xbFMZZBNI

Others said they’d seen it coming miles away – and been denounced as “conspiracy theorists” for noticing.

I was called a ‘conspiracy theorist’ 6 months ago for saying they’d start doing stuff like this.This is about compliance & control. They appeal to people’s better natures to sell it.It’s sinister as hell and the masses are sleepwalking right into it.https://t.co/7WiwlZ7adh

Several pointed out that HSBC – which was recently convicted of laundering billions of dollars in profits for international drug cartels – lacked any sort of moral high ground to give orders to customers.

HSBC virtue signalling stance on masks would be far more impressive if it didn’t help the Chinese Government suppress democracy whilst laundering money for Mexican cartels.

Unless they are Mexican drug lords who need to launder their money or the 1% moving money offshore to avoid taxation. #HSBChttps://t.co/t4GiFZHxdK

However, some applauded the bank for keeping its employees safe.

So @HSBC_UK are refusing service to people who don’t wear a mask in branch and lots of people are saying it is the thin end of the wedge. I say f*ck those people. Wear a mask or bank online. Stop being a f*cking baby. Well done HSBC for protecting staff and customers.

HSBC trending, people moaning about wearing masks in a bank.Who actually goes into a bank in this day & age? And if you do, wear a mask you it’s not going to hurt you.

Already enmeshed in its third lockdown, the UK issued further rules to residents on Tuesday. Shops, supermarkets, and most other indoor locations require customers to cover their face or be denied admission if they lack a medical exemption.

However, not every establishment is eager to do double duty as mask police. The Post Office, for example, has urged customers to obey the rules, but told the Mirror it would not be refusing admission to maskless customers. A trade group representing over 170 British retailers urged police to step in, arguing it was not shops’ responsibility to monitor customers’ adherence to the ever-shifting rules.