‘US Capitol is now a military base’: Photos of National Guard sleeping on Congress floor go viral ahead of Trump impeachment 2.0 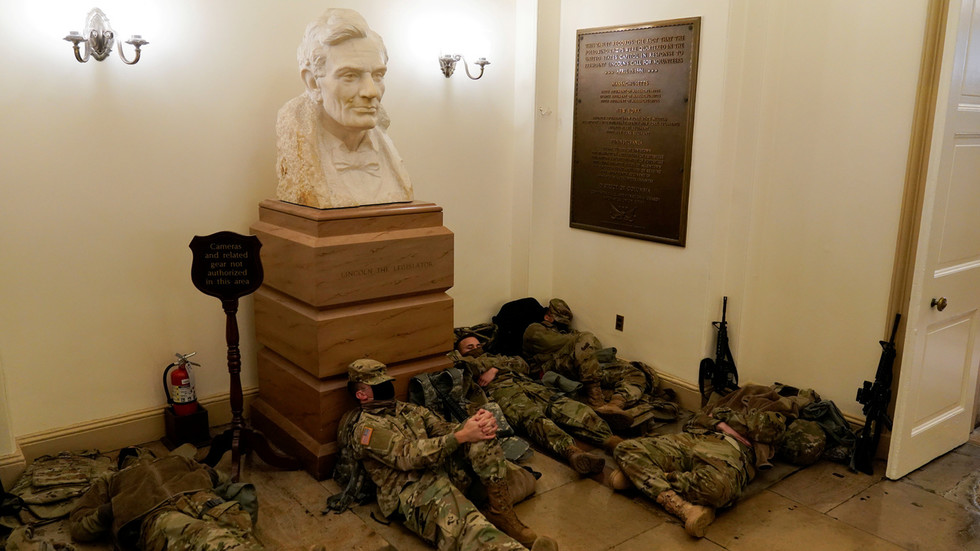 Photographs showing members of the National Guard sleeping on the floor of the US Capitol blew up on social media ahead of a vote to call on Vice President Mike Pence to relieve President Trump of his power.

Journalists in the Capitol took to Twitter to post the images, which showed the armed troops camping out in hallways by fire extinguishers, educational displays, and even a bust of Abraham Lincoln.

“Well this is something I thought I’d never see,” declared the Daily Telegraph’s US editor Ben Riley-Smith, while CBS News reporter Grace Segers called the display “surreal” and “one of the weirdest and most horrifying days of my life.”

CNN Senior Washington Correspondent Jeff Zeleny pointed out that “unlike House members who choose to stay in their offices to either save money or make some kind of a point, they have no House gym or shower to use.”

“The US Capitol is now a military base,” tweeted Bloomberg News’ Erik Wasson.

The US Capitol is now a military base. Massive show of force outside. National Guard is armed with rifles and spread just few feet apart along perimeter as House prepares to impeach the president pic.twitter.com/cPspvZMBUF

Thousands of National Guard troops were in the Capitol on Wednesday ahead of a House vote to call on Pence to invoke the 25th Amendment and relieve the president of his power.