‘NO violence’: Trump calls on Americans to ‘calm tempers’ amid political crisis 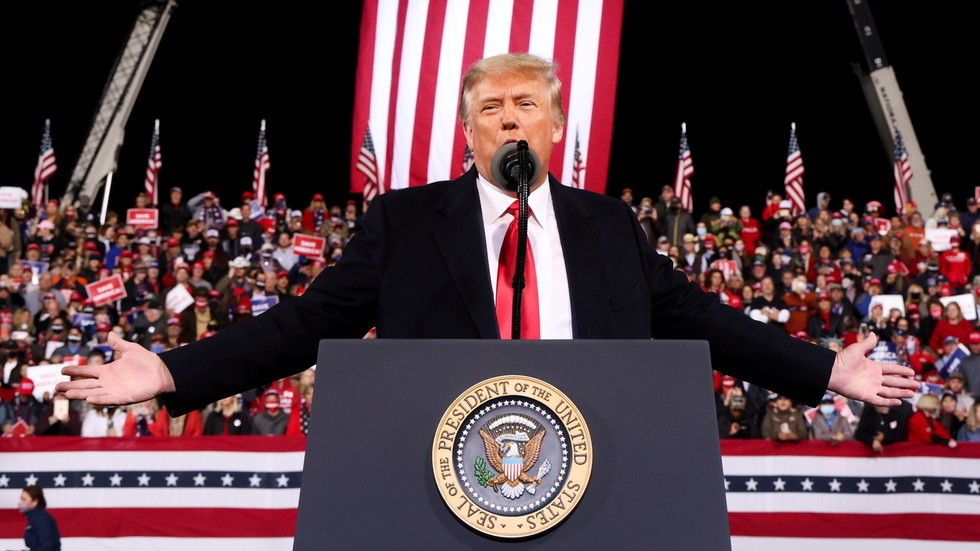 As the Democrat-dominated House called for his impeachment for “inciting insurrection,” US President Donald Trump urged Americans against engaging in any violence or lawbreaking to help ease political tensions.

“In light of reports of more demonstrations, I urge that there must be NO violence, NO lawbreaking and NO vandalism of any kind,” the president said in a statement, published Wednesday by Fox News, with him having been banned by all social media platforms.

“That is not what I stand for and it is not what America stands for. I call on ALL Americans to help ease tensions and calm tempers,” Trump added.

An unnamed senior adviser told Fox that Trump is asking all Americans “to join with him in ensuring that there is an orderly and peaceful transition next week,” including Big Tech companies that sought to prevent him from speaking.

“This is a critical time in our nation’s history and surely we can all come together to deliver this important message and not continue to play partisan politics,” the adviser added.

Trump’s statement comes after major US media circulated an alleged FBI bulletin on Monday, claiming that the ‘Boogaloo’ movement had threatened to hold armed rallies in Washington, DC and all 50 US state capitals starting on Friday, ostensibly to protest Trump’s impeachment by the House. The FBI itself has neither confirmed nor denied the reports.

Democrats have accused Trump of inciting the “insurrection” on par with the 1861-65 Civil War by giving a speech last Wednesday to a crowd of supporters in Washington, DC saying that the 2020 election was “stolen.” While he was still speaking outside the White House, groups of demonstrators broke into the Capitol building and disrupted the joint session of Congress that was meeting to certify election results.

The interruption came just as the House and the Senate had broken off to consider Republican objections to Joe Biden’s certification as the next president. A number of GOP lawmakers later cited the unrest as the reason to abandon their objections. One person was shot and killed by Capitol Police, while four others – including an officer – also died under as-yet unspecified circumstances.