Juri Ratas, the Prime Minister of Estonia, announced on Wednesday that he will stand down from the role amid a row over state-backed loans and government contracts, which were allegedly offered to political donors.

In a Facebook post, Ratas said that he “made a value-based decision to resign from office over the situation.” However, he argued that an investigation launched by Tallinn’s public prosecutor’s office did not, by itself, imply that he or his colleagues had acted “in an illegal way.” But he added, “in such a situation, it seems only right that I give myself a chance to shine light on the circumstances. This is for political and social peace…. We need to restore confidence in our state”.

Ratas’ Centre Party has come under fire for ties to property developers Porto Franco. The firm received a €39 million ($47 million) loan from public funds, as well as a profitable contract for the redevelopment of the capital’s historic harbor. The Mayor of Tallinn is also a member of the governing Centre grouping, and both the Party’s Secretary General Mikhail Korb and a government advisor are listed among those suspected of involvement in an illicit arrangement.

The ruling party came to power for the first time in its history in March 2019. Before then, however, it had attracted attention for a series of politically charged scandals, including accusations of discrimination against the country’s Russian population, despite its name and professed center-left ideology. Around a third of the country’s population speaks Russian as a native language. Party members also came under fire for participation in a torchlight procession that was reported to have been held in honor of Nazi SS legionaries. 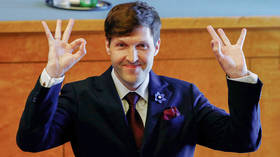 The Centrists had governed alongside their right-of-center coalition partners, the Conservative People’s Party and the Fatherland Party. However, later on Wednesday, the country’s President, Kersti Kaljulaid, was reported to have asked the leader of the more liberal opposition Reform Party, Kaja Kallas, to attempt to form a government.

On Twitter, Kallas said that her party will do everything it can to establish a new government, but that she “would not underestimate the willingness of the current coalition parties to continue together at all costs.” “The government has fallen, but unfortunately the coalition still exists,” she added. If a new agreement between parliamentary parties cannot be concluded within the next two weeks, fresh elections will have to be called.