Antibodies for all! Putin orders mass vaccination against Covid-19 with Sputnik V jab to be offered to every Russian

President Vladimir Putin has instructed the Russian government to begin rolling out a coronavirus vaccine for the entire population from next week, with more than 1.5 million people having already received the jab.

In a meeting with ministers on Wednesday, Putin said that the time had come to “move from large-scale vaccination to mass vaccination.” He added that the Sputnik V formula, developed by Moscow’s Gamaleya Institute, was “the best in the world.”

While comparisons between different vaccines are hard to draw, given the unique circumstances under which they have been developed, he insisted that “no others demonstrate this level of protection and such a degree of safety.”

Also on rt.com Symbolic moment as Russian cosmonauts get jabs of Sputnik V – named for first space satellite – ahead of latest ISS mission

However, the president expressed concern over the global fight against Covid-19, saying that “we see across the world, unfortunately, that it is not yet possible to strangle this disease, and we cannot prevent all the negative consequences associated with it.”

Responding to the new directive, Deputy Prime Minister Tatiana Golikova reported that the mass immunization program will begin next week, from 18 January. While 1.5 million people in the country have already received their first jab, according to the Russian Direct Investment Fund, which financed Sputnik V, the list of those eligible was still subject to a number of restrictions. 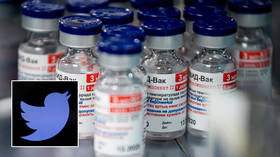 Doctors, teachers, factory workers, municipal officials and those working in finance and the media were initially offered appointments first. However, there was speculation that, in practice, few checks were put in place before people were given their injection. It is still unclear how the mass-immunization program will be administered, and whether all Russians will be offered shots at once, or staggered based on their age group.

Putin added that Sputnik V was particularly well-suited to being made available across the entirety of the world’s largest country because “thank God, our vaccine does not require any unusual conditions for transportation,” and can be stored at ordinary refrigerator temperatures.

A number of other nations are also racing towards the vaccination of all their citizens. Israel announced on Tuesday that 1.8 million people from its population of nine million have received their first dose, while the UK is leading the pack in Western Europe, administering around 200,000 jabs a day in an effort to immunize everyone over the age of 70 by mid-February.