The authorities in the southern Russian city of Krasnodar have opened an investigation into the deputy co-ordinator of opposition figure Alexei Navalny’s organization, over claims she made about the country’s leaders online.

In a live broadcast on Instagram on Tuesday, Anastasia Panchenko said she had received a call from an official, who informed her that she was being investigated for “insulting the president,” local media reports.

After presenting at a police station, she was allegedly told the case pertains to comments she made on one of Navalny’s Instagram stories, in which she referred to Vladimir Putin as both an “extremist” and an “enemy.”

Also on rt.com ‘I’m coming home’: Navalny announces he will return to Russia on Sunday, despite stated belief that Kremlin tried to murder him

Under the country’s administrative code, which prohibits certain insults from being leveled at authorities without supporting evidence, the charges could carry a fine of up to 100,000 rubles ($1,300). Panchenko says she refused to give the police her side of the story, and insists the words used were not actually insults. “It is a statement of fact,” she added.

In August last year, the former co-ordinator of Navalny’s Krasnodar headquarters was fined 80,000 rubles ($1,000) for a similar set of comments. In a video clip in which he discussed proposed amendments to the country’s constitution, Lev Gammer, the court found, demonstrated disrespect to both the authorities and Putin personally.

The law on slandering public officials has been in place since March 2019, and covers not only the president, but also governors, security officials, municipal leaders, judges, and parliamentarians. In an interview with the TASS news agency in October, Putin said that “criticism of the authorities is not prohibited in our country,” but that “it is forbidden to desecrate the symbols of the state … Mockery of the symbols of the state hurts every citizen.” The measures have also covered those leveling perceived insults against those who hold state offices. 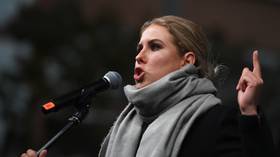 The news comes as Navalny announced he would be returning to Russia on Sunday, almost five months since the anti-corruption activist was flown to Berlin in a coma following what his team allege to be a state-sponsored poisoning. In a post on Instagram, the Moscow protest leader said he would return despite his belief the Russian government is intent on killing him.

The Kremlin’s spokesman, Dmitry Peskov, said last month that Navalny has a “pronounced persecution mania … he is even said to compare himself to Jesus.”

On his return, Navalny will answer to two separate legal cases in which he is a defendant. Together, the charges potentially carry years behind bars, and he could be taken into custody on arrival.