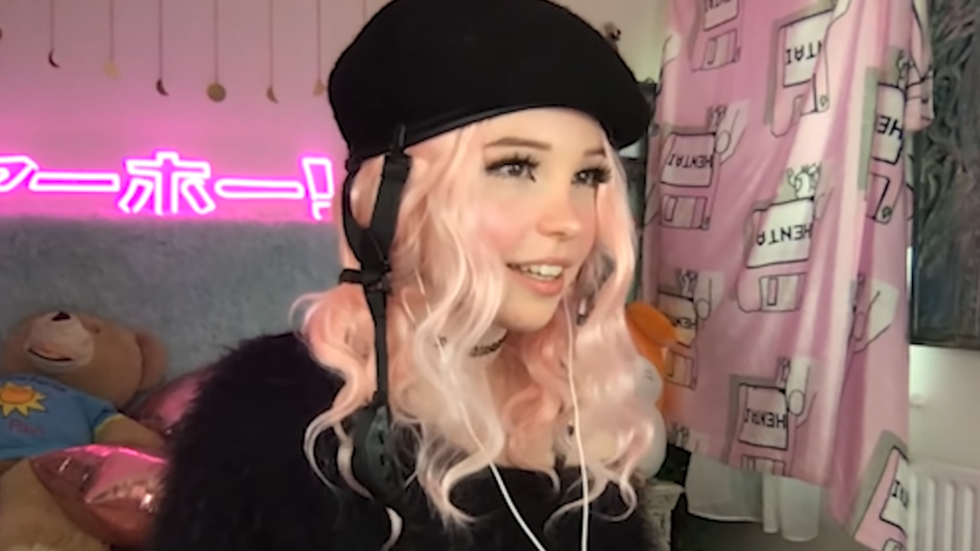 The controversy started after Delphine uploaded a preview [NSFW] of her “perfect first date” photo shoot to Twitter on Tuesday, which included photographs of Delphine – dressed in a Lolita style – tied up in the back of a car with tape over her mouth and engaging in sexual intercourse with a man in a balaclava against a tree.

The photo shoot proved popular, gaining over 57,000 likes, but also sparked a wave of backlash from critics who accused Delphine of “romanticizing rape.”

romanticising rape to your following of mostly already weird men, presenting as a younger girl is absolutely disgusting and you should be ashamed of posting this.

TW // SEXUAL ASSAULT yeah belle delphine is not trending again for some jokes or some bath water. she is trending again for fetishizing rape. please be careful when looking through the tag and don’t go to her page and look at her pin tweet

“belle delphine dressing as a child pretending to get kidnapped & r//ped and ppl simp over her … u need a psychological evaluation,”commented one user, receiving over 80,000 likes.

“I’ve never had a problem with Belle but this is messed up and I really hope she (and everyone else) can see how this is harmful,”complained another with over 2,000 likes. “This isn’t hot or sexy. It’s traumatizing and a dangerous reality.”

Also on rt.com ‘Cancel culture is like a medieval mob’: Mr. Bean blasts the woke brigade and social media giants for increasing polarization

Some Twitter critics even took aim at Delphine’s followers, with user @YaBoiToasty_ posting, “If you follow or support Belle Delphine. Unfollow me and never talk to me again. I get having a fetish or a kink. But this is f**ked. Dressing up as a kid and pretending to get raped on cam? How the f**k do you come up with this.”

Others complained about Delphine not posting a “trigger warning,” and claimed that the photo shoot would make her male followers “think this is normal.” The pile of reactions led to Delphine becoming one of Twitter’s trending topics on Tuesday and Wednesday.

Belle Delphine making CNC, with no trigger warnings or context of what’s going on, dressed like a little girl too, is so calculated and so unbelievably weird.

The issue isn’t having this kink, it’s the fact that a lot of males here will see this and think this is normal. They don’t know about the safe words, long discussions, and therapy that take place before engaging in a scene like this. They just see rape.

Delphine also found some users willing to defend her, however. “Everyone’s freaking out in this but there’s a difference between two partners consenting in role-play vs actual assault,” a more sympathetic user pointed out.

Delphine – who moved on from more softcore photo shoots to full-blown pornography last month – is no stranger to controversy, having been in and out of the news over the past few years for engaging in stunts like selling her bath water.

In November, Delphine was even temporarily banned from YouTube before her account was restored following accusations of hypocrisy against YouTube – which had allowed allegedly more explicit videos from rapper Cardi B to remain on the platform.