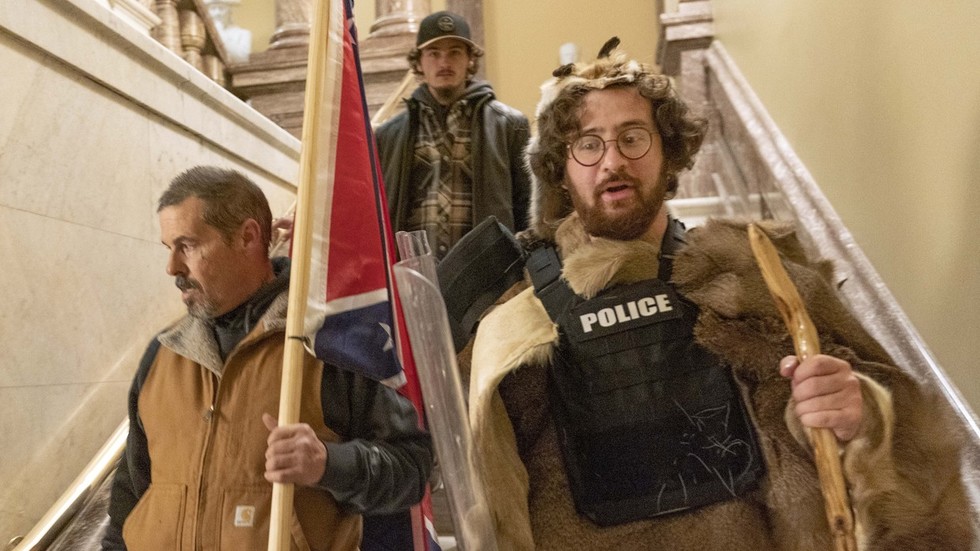 Aaron Mostofsky, the son of a New York judge, is the latest protester to be arrested and charged for participating in the storming of the US Capitol.

Mostofsky was arrested on Tuesday morning by the FBI and is facing four felony charges, including theft of government property.

Mostofsky was one of the protesters to gain the most attention following events at the Capitol, mainly thanks to images showing him wearing fur pelts and a vest with the word “police” on it.

Aaron Mostofsky has been arrested. He stormed the U.S. capitol saying the “election was stolen”, “we were cheated”, and “I don’t think 75 million people voted for Trump.”Prosecutors say he took a bus from Brooklyn to D.C. to “stop the steal” pic.twitter.com/LF2WBwZfDC

Mostofsky’s father, Shlomo, is a Supreme Court judge in Brooklyn. A spokesperson for the judge said the father had no knowledge of his son’s actions.

Police executed a search warrant at the judge’s son’s home and video appeared to show them removing the same fur pelts he was wearing during the riot. Mostofsky was arrested at his brother’s home in Brooklyn, according to reports.

BREAKING: Aaron Mostofsky, the son of a NY Supreme Court judge was arrested in Midwood Brooklyn on Tuesday morning for his alleged involvement in the Capitol riot. pic.twitter.com/MweFpdvLkX

In an interview with the New York Post taken right amid the Capitol riot, Mostofsky said he was taking part in the protest because he believed election fraud was behind Joe Biden’s presidential victory.

“I don’t think 75 million people voted for Trump — I think it was close to 85 million,” he claimed. “I think certain states that have been red for a long time turned blue and were stolen, like New York.”

Mostofsky then added that the lawmakers “shouldn’t be afraid, they should get the courage to do their duty” to examine the alleged election fraud.

The criminal complaint on Mostofsky’s actions list his vest and a riot shield he was photographed using as government property. According to the complaint, he texted a friend before storming the Capitol to look “for a guy looking like a caveman.”

“Even a caveman knows it was stolen,” he also reportedly wrote.

Mostofsky also wrote on Instagram that it was unfortunate his image went viral because “now people actually know me.”

Mostofsky’s brother, Nachman, the vice president of the South Brooklyn Conservative Club, also reportedly attended the pro-Trump Save America rally on January 6, but claims to have left before the Capitol was stormed.

According to Nachman, his brother “did nothing illegal,” telling Gothamist his brother had been “pushed inside” the Capitol building.