A Russian Strain: Covid-19 found to have mutated 18 different times in one person, with some never seen before

A Russian woman with a malignant lymphoma, who battled Covid-19 for five months, was found to have 18 different mutations of the virus inside her body. She first caught it in April and last tested positive in September.

The revelation was made last week, when Russian scientists published their research on Virological, a discussion forum for analysis and interpretation of virus molecular evolution and epidemiology. Contributors from four universities and one hospital analyzed the woman’s genome and found two of the Danish ‘mink mutations,’ as well as one recently discovered in the UK.

With so many changes, what was found could be classed as its own strain.

According to Nikolai Kryuchkov, an immunologist who spoke to the Moscow daily MK, Covid-19 changes rapidly in persons with a weakened immune system. The 47-year old patient, who at the time was undergoing chemotherapy, would fit into this category.

“Experts have noticed that the rate of mutation in the organisms of weakened people is several times higher than the rate in the normal human population,” he said. 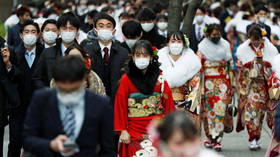 Another expert, genomic engineering specialist Pavel Volchkov, noted that the Covid-19 found in the woman has similarities to the much-feared British version, and also has its own unique characteristics.

“The new variant of the coronavirus found in Russia belongs to the same group as the British ‘strain,’” he told Moscow newspaper Izvestia. “They have common mutations. But there are also new ones.”

On Monday, Alexander Gintsburg, head of the Gamaleya Centre which developed the Sputnik V vaccine, noted that there is a high probability that Russia already has its own strain.

“We are looking forward to our country discovering a Russian strain with altered properties. If they already exist in Britain, in South Africa, in Brazil – there are strains here,” he said. “[Russia] is much larger. A new strain should have been identified long ago.”