For years, Belarus has been one of the countries least widely known outside of Eastern Europe. While the reasons for that are complicated, confusion over its Russian-sounding name can’t have helped it establish its identity.

Now, one of the leaders of the country’s long-running protest movement, Svetlana Tikhanovskaya, has launched a campaign, from her exile in Lithuania, to rebrand the troubled nation.

In a post on her Telegram channel on Monday, she revealed that she had sent a formal communique to her host country’s Minister of Foreign Affairs, Gabrielius Landsbergis, asking him to intervene and change how her country is referred to. 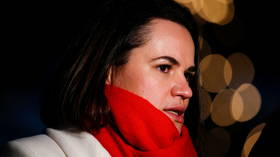 At present, her native land is known in Lithuanian as Baltarusija. However, the one-time opposition candidate insists that it should be changed to a Lithuanian-language equivalent of the more-modern Belarus, as it is known in the English language.

According to her, “this would be a sign of Lithuanian respect for the sovereignty of Belarus and a continuation of the cultural identity of the Belarusian people. The present name, unfortunately, is mistakenly seen as a derivative… linking it to the country of Russia.” She adds that 24 European nations have now updated their nomenclature.

Tikhanovskaya’s move is the latest in a long history of controversy that cuts to the heart of the country’s national identity. Belarus takes its name from a historic Slavic-language term meaning ‘White Rus,’ sharing the same stem as present-day Russia. In the Soviet Era, its Russian-language variant Byelorussia was often used, before being displaced by the variant it now uses, at home and abroad.