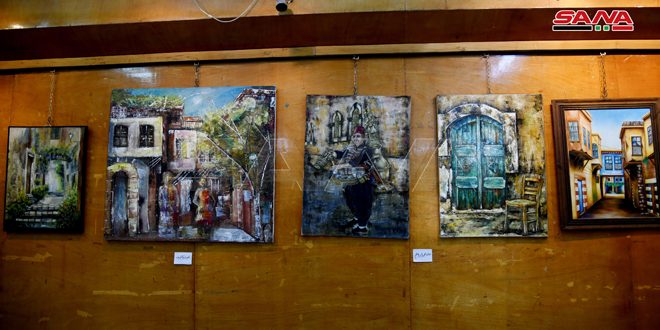 Damascus, SANA- “Damascus in the memory” was the title of an exhibition organized by the Arab Cultural Center in Mezzah for 24 plastic artists with the aim of reviving the heritage and strengthening the Syrian identity within the efforts of the Ministry of Culture to pay attention to the tangible and intangible heritage.

Plastic artist Ahmed Shamma explained that he chose a painting about one of the old neighborhoods of Damascus and the western door in the Umayyad Mosque and the coffee of al-Nawfara, as this place constitutes a true documentary material of the Damascene reality as if it were a photograph that he presented with a painting.

Damascene heritage artist Nazir Baroudi explained that it is necessary to remind our children and grandchildren of our beautiful heritage that we lived because peoples depend on the heritage with their present and planning for the future, explaining that he trusted his works for the al-Hejaz station and the electric train that the Syrians used in their transportation within the city of Damascus until the 1960s.

The plastic artist Basema Hariri participated in three works on the Damascene heritage, using the oil colors of the lanes and houses, indicating the importance of evoking the heritage in the works of plastic art.