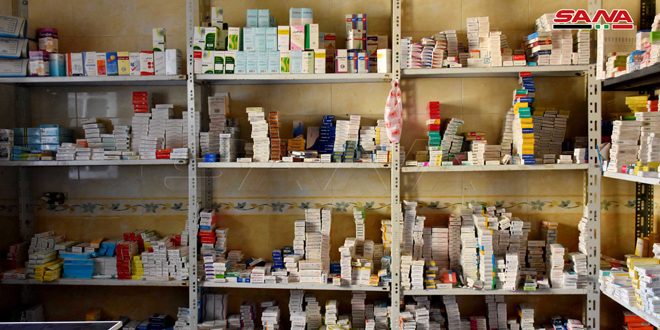 Homs, SANA- “Contribute with us” initiative launched by “Steadfast Despite Injuries” association in Homs, launched last April, reflected the importance of solidarity among the society’s sons through ensuring the medicine for the families of Syrian Arab Army’s martyrs, Army’s wounded personnel and those who are in need for free through a pharmacy provided to medicine by donors.

Thousands of patients benefited from the pharmacy which was opened last November as more than 50 prescriptions are daily disbursed for the patients of heart, diabetes, neurological disorders and other diseases according to Dr. Muhsen Tarraf who supervises the initiative.

Tarraf told SANA reporter that the idea of initiative came with the aim of easing financial burdens for those with chronic diseases.

“The start was by collecting the free samples from doctors, some drug companies, and from citizens who donate medicines they no longer need for the benefit of the pharmacy, after that the volunteer pharmacist sort and distribute the medicine for free according to prescriptions, the way that contribute to delivering the medicine to the mentioned patients” Tarraf added.

He referred to the possibility of launching other initiatives in several domains to support the stability of society and strengthen the solidarity among its people to face the high costs and the repercussions of the unjust blockade imposed on the Syrian people.

The volunteer chemist who supervises the distribution of the medicine, Arwa Deib, said that the medical office at the association comprises a number of volunteers who organize the patients’ data and refer them to the pharmacy to disburse the medication for free.

In turn, Chairman of the association, Abdul Karim Muhammad, said that the idea of the initiative comes to meet the patients’ need of medicine for free and to encourage all the associations to continue implementing initiatives that support the poorest spectrum in society and avoid the bad impacts left by terrorist war on Syrians.