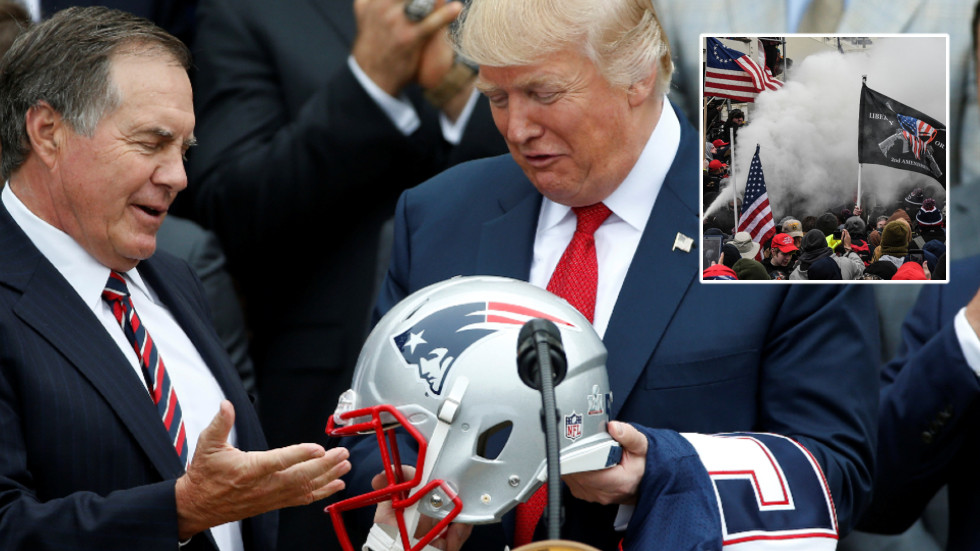 Bill Belichick, the legendary head coach of the New England Patriots, has refused an offer by Donald Trump to receive the Presidential Medal of Freedom, writing online that he felt it seemed inappropriate after last week’s riots.

Just a day after it was confirmed that the Professional Golfers’ Association has moved to strip Trump’s Bedminster golf course of the 2022 PGA Championship, the outgoing president has now received another firm rebuke from the sports world after Belichick indicated that he will refuse what is the highest honor available to a citizens in the United States.

The six-time Super Bowl winner, who is widely considered to be the greatest coach in NFL history, indicated that he refused the offer in the wake of the Trump-inspired riots at the US Capitol last week which led to the deaths of at least five people including a police officer.

“Recently I was offered the opportunity to receive the presidential medal of freedom, which I was flattered by out of respect for what the honor represents and admiration for prior recipients,” Belichick announced in a statement released on Monday.

Patriots’ HC Bill Belichick will not be traveling to Washington nor accepting the Presidential Medal of Freedom, he announced today. pic.twitter.com/uvLLigFlHU

Still dislike Belichick, but kudos to him for understanding the moment we live in today. The only way we are going to prevent more events like last week’s insurrection is to begin ignoring Trump and stop pretending he is president.

Good statement from Belichick. That said, one would have to be totally tone deaf to get a medal photo op from that guy after what happened this past week. Maybe a round of golf later this year.

“Subsequently, the tragic events of last week occurred and the decision has been made not to move forward with the award.

“Above all, I am an American citizen with great reverence for our nation’s values, freedom and democracy.

“I know I also represent my family and the New England Patriots team.

“One of the most rewarding things in my professional career took place in 2020 when, through the great leadership within our team, conversations about social justice, equality and human rights moved to the forefront and became actions.

“Continuing those efforts while remaining true to the people, team and country I love outweigh the benefits of any individual award.”

The decision by Belichick, a hero to many in the predominantly liberal New England and its surrounding areas, will come as a relief to some those who had expressed their anger at what was seen as Trump “sports-washing” his reputation by associating himself with sports stars – with the Boston Globe penning an op-ed entitled “Don’t go” directed at Belichick.

Y’all would cancel him ASAP if he chose the opposite, it’s not that difficult to see.

The liberal media would’ve destroyed his name if he went. He was bullied not to go. Feel bad for the ones that are blind to see what is going on in our soon communist country.

Others railed against the move and described it as another example of “cancel culture“.

Regardless of the motivations, the news will be a bitter blow for Trump who had long spoken up his relationship with Belichick, even joking last year that he expected the Patriots coach would be a fine United States General.

Trump has waded into the sports world on several occasions throughout his presidency, not least during his backlash at the trend of sideline protests popularized in the NFL by Colin Kaepernick, referring to participating players as “sons of bitches“.

Golfers Gary Player and Annika Sorenstam, who accepted the Presidential Medal of Freedom in the White House last week, both came under fire in the media for continuing to attend in the wake of Wednesday’s riots – for which Trump is currently facing his second impeachment on a count of incitement of insurrection.

Also on rt.com ‘He’d be as good as any general out there’: Trump jokes he’d ask legendary Patriots coach Belichick for military advice