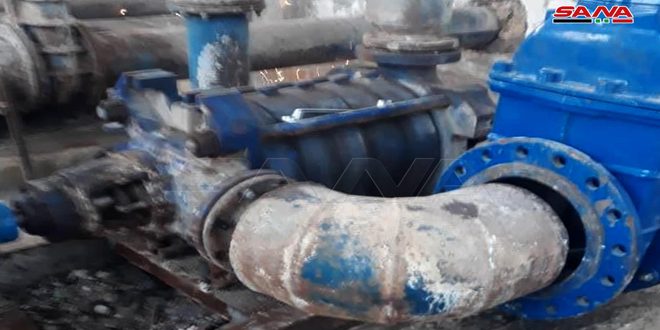 Idleb, SANA- The Public Establishment for Drinking Water in Idleb Province has announced the start of experimental pumping of water into the network of Khan Sheikhoun area in the countryside of the province which had been liberated from terrorism, in preparation for the permanent and regular pumping of water and to secure water for the people returning to their homes.

Director of the Establishment, Eng. Mohammad Ajami, said in a statement to SANA reporter, that the experimental pumping operations into the water network came after the rehabilitation of the network and after repairing the damage caused to it by terrorist groups while they were in the area over the previous years.

Ajami noted that the water pumping and release operations will be according to a specific schedule according to the operation of the water pumps, whether on electricity or diesel, to ensure that Khan Sheikhoun area is supplied with drinking water periodically, and to allow the people returning to their homes to have an access to water from the main network, and to be able to fill their tanks with water.

He pointed out that the maintenance workshops at the Public Establishment for Drinking Water in Idleb are ready to respond to any emergency or complaint by the people to fix any damages or problems that may hinder the supply of drinking water to the city with the continuity of operating a water well in Khan Sheikhoun.

Mohammad Knissawi and Hussein Haj Ali, from Khan Sheikhoun, described the project to resume pumping water into the main network in Khan Sheikhoun city as a great service achievement that provides great services to the returning people, in addition to encouraging their peers to return to their homes and city, continue their lives, cultivate their lands and practice their commercial and economic activities again, especially since the city is currently recovering gradually in various aspects of service.