William Burns, ex-envoy to Russia who accused Putin of using judo-like tactics to ‘sow chaos’ in US, named as Biden’s CIA director

President-elect Joe Biden has nominated career diplomat William Burns to serve as director of the Central Intelligence Agency, claiming that Americans will “sleep soundly” with Burns at the helm of the shadowy intel service.

Burns, who is currently president of the Carnegie Endowment for International Peace, an international affairs think tank based in Washington, DC, retired from the US Foreign Service in 2014 after a 33-year career in diplomacy. He served as deputy secretary of state in the Obama administration from 2011-2014, and as ambassador to Russia from 2005 to 2008. Before his assignment in Moscow, Burns was US envoy to Jordan from 1998 to 2001, and was appointed assistant secretary of state for Near Eastern affairs from 2001 to 2005.

In a press release, Biden described Burns as a “exemplary diplomat with decades of experience on the world stage keeping our people and our country safe and secure.” The statement said that Burns understood the alleged threats facing the United States, whether they be “attacks emanating from Moscow, the challenge China poses,” or plots being hatched by terrorists and other non-state actors. 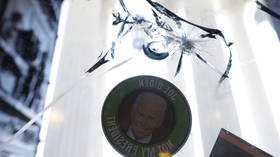 Like many other State Department veterans, Burns has repeatedly accused Moscow of interfering in the 2016 presidential elections.

In a 2017 op-ed published by the New York Times, the retired diplomat accused Russia of “aggressive” and “deeply troubling” election meddling. Burns predicted that Washington’s relationship with Moscow will remain competitive and “often adversarial” for the foreseeable future, claiming that Russian President Vladimir Putin is seeking greater influence in the world “at the expense of an American-led order.” He alleged that Russia is dreaming of a dominant position in global affairs unconstrained by “Western values and institutions.”

He called on the US to focus on the conflict in Ukraine, predicting that the country’s fate will determine the “future of Europe, and Russia, over the next generation.”

Tellingly, he also dismissed the “superficially appealing notions” like cooperation against Islamic terrorism. He claimed that Russia’s efforts to help the Syrian government defeat Islamic State (IS, formerly ISIS) has made the terrorist threat “far worse.”

His animosity towards Russia was again revealed in an interview with the Atlantic magazine in 2019. He told the outlet that Putin had been able to “sow chaos” in the United States by “acting like [a] good judo expert, which he is.” According to Burns, the Russian leader took advantage of a “stronger opponent” by leveraging the “polarization and dysfunction” in the US political system.

Burns even suggested that the now-debunked claims of “collusion” between Moscow and the Trump campaign in 2016 had merit, hinting that Special Counsel Robert Mueller could potentially uncover a larger conspiracy behind Putin’s alleged judo-like interference.

Mueller’s probe ultimately found no evidence of collusion, despite years of salacious media reports alleging overwhelming proof of a vast conspiracy between Trump and the Kremlin.

The diplomat appears to have a more reconciliatory approach towards China. Although he has identified Beijing as a long-term competitor with Washington, he has argued that China was more focused on “adapting” to the US-led world order, rather than “undermining it,” which he accused Russia of doing. However, he expressed support for at least some aspects of the Trump administration’s trade war with China, describing the hardline economic policy as “overdue.”