‘Good Morning Britain’ host Piers Morgan has been accused of Tier 4 hypocrisy after confessing that he spent Christmas in the Caribbean, despite lecturing people about the evils of non-essential travel during the Covid-19 crisis. 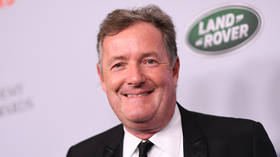 Morgan, who has used his television platform to champion the government’s lockdown measures, and issue scathing rebukes to the ‘Covidiots’ who violate them, confirmed on Sunday a report that he had traveled to Antigua for the Christmas holiday.

Political gossip site Guido Fawkes revealed last week that, according to an unnamed source, Morgan flew first class to Antigua shortly after urging cabinet ministers on his show to introduce tougher lockdown measures ahead of Christmas. He left the UK just before the government announced tough Tier 4 restrictions, according to the scoop, and enjoyed Christmas at an exclusive resort located on a private island accessible only by boat from Antigua.

As the political site noted, Morgan maintained an uncharacteristic silence on social media over Christmas.

After avoiding the explosive story for a week, Morgan claimed the report contained numerous inaccuracies, while acknowledging that he did in fact make the holiday getaway. The television host argued that the trip did not break any of the government’s restrictions at the time of his departure, and claimed that he had never called for Christmas to be “cancelled,” as the report alleged. He also denied that he flew first class.

Hi Guido,Happy New Year.1) The Govt said travel abroad from Tier 3 was allowed if people went straight to the airport. 2) I didn’t call for Christmas to be cancelled.3) I haven’t flown on Virgin for a year.4) I last flew First Class in February. Otherwise, spot on! https://t.co/FvwFidHX6a

Guido took a victory lap after Morgan confirmed its story, and accused the TV celebrity of engaging in “desperate excuse making that he would condemn from an interview guest.” The site claimed that Morgan ignored the government’s guidelines about non-essential travel, even after “a year of ranting about Covidiots and demanding tougher lockdowns.”

The outlet also pointed to a rather sanctimonious statement that he made back in November, in which he declared that Covid-19 “doesn’t give a flying f*ck about Christmas” and suggested that Britons should assent to a “virtual” Christmas in order to “save as many lives as possible.”

Covid-19 doesn’t give a flying f*ck about Christmas. If we have to make compromises this year, so be it. We can still attend virtual church services, & still have virtual meals with all the trimmings. The vaccines are coming fast, let’s save as many lives as possible until then.

Arguing that the apparent double-standard was “beyond cynical,” Guido asked: “Why didn’t Piers have a virtual beach holiday at home with a sun lamp, deckchair and a bag of sand?”

He really owes @GMB viewers an apology tomorrow. No excuses about how safe Antigua is or claims that it was legal. It wasn’t essential.

The gossip site called on Morgan to apologise to his viewers, insisting that there were “no excuses” for his non-essential international travel over the holidays.

Countless social media users joined the pile-on, labelling Morgan as a hypocrite who skirted the rules as he shamed those who questioned the government’s Covid-19 measures.

You told us to suck it up if we couldn’t have the Christmas we wanted with our families. SAGE said do not travel . So who did you fly with in December??

Finally you admit that you flouted Covid rules. Think you have lost all credibility and the right to lecture, hector and vilify others, as the rules don’t apply to you in your eyes. The hysteria you whipped up on Cummings and you did the same.

No we’re getting somewhere Piers my old son. Now you’ve admired going to Antigua from a tier 3 restricted area please see screen grab of international travel from a tier 3 area. Can I please ask how was you legally permitted to travel? This meant for work or education. pic.twitter.com/FCtfVjN1wx

This isn’t the first time that Morgan has been accused of flouting the rules that he so militantly defends. Last month, he apologised after he was photographed getting into a taxi without wearing a mask, breaching the government’s coronavirus guidelines.

It appears that the talking head isn’t the only public figure to enjoy faraway beaches as they lectured Brits to stay home. The council leader of Richmondshire, Angie Dale, reportedly issued a statement to her constituents last week in which she reminded everyone to obey advice against non-essential travel. The notice, however, was written while Dale and her family were vacationing on the Maldivian island of Kudahuvadhoo.