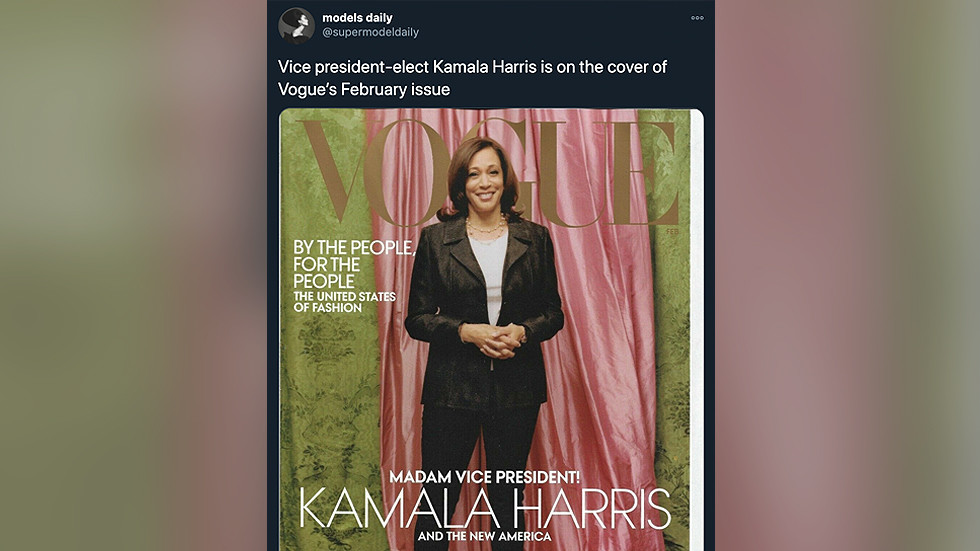 Liberal commentators have savaged Vogue, and even accused its editor of racism, after the fashion magazine unveiled its February cover, featuring incoming Vice President Kamala Harris.

Harris graces the cover of February’s issue of Vogue, which hails the VP-to-be as “Madam Vice President.” However, Harris’ photograph – in which she wears a casual suit and a pair of Converse trainers – angered liberal commentators online when it went viral on Saturday night.

Liberal pundit Yashar Ali claimed the cover option was not the one Harris’ team had expected to see. According to Ali, Vogue editor Anna Wintour had agreed to use the image of Harris in a powder-blue suit, but the magazine about-turned after the photoshoot was done.

Some fashion magazine news….1. The February Vogue cover featuring VP-elect Kamala Harris has been widely criticized on social media this eveningBut according to a source familiar with the publication plans, this is not the cover that the Vice President-elect’s team expected pic.twitter.com/lBC9DnfYNC

Harris’ supporters blasted Vogue for running a “washed out” and “jumbled” cover. “They couldn’t decide whether she is going to a luxe French salon, the Senate floor, or taking a jog,” one tweeted.

Vogue knows Kamala Harris loves her sorority, suits, comfortable pants and chuck taylors. So they just jumbled it all together for the cover. Except they couldn’t decide whether she is going to a luxe French salon, the Senate floor, or taking a jog. pic.twitter.com/FDNBbcw8tR

Folks who don’t get why the Vogue cover of VP-elect Kamala Harris is bad are missing the point. The pic itself isn’t terrible as a pic. It’s just far, far below the standards of Vogue. They didn’t put thought into it. Like homework finished the morning it’s due. Disrespectful.

Re the Vogue cover of Kamala, it’s a bad photo. Wow.

Others accused the magazine, and Wintour herself, of racism, claiming Harris’ skin in the photo had deliberately been whitened. Ali went as far as to claim “Wintour does not truly respect Black women,” basing his judgment on the views of supposed sources in the fashion world. One poster alleged Wintour is “one of the biggest racists in publishing,” and another that she even “deserves suffering for her treatment of black women.”

Anna Wintour needs to go. If the only time her team can properly style a black women is when she’s covered in couture then her tenure has ran it course. Look at how Kamala Harris’ Elle cover straight up bodied Vogue. Electric chair! pic.twitter.com/aBVZIho98P

Despite the uproar, the magazine hasn’t yet hit the shelves. Its team still has time to go with the alternative cover option, or it may simply choose to sit it out and simply wait for the furor to die down. Harris will enter the White House on January 20, when she and Joe Biden will be inaugurated.