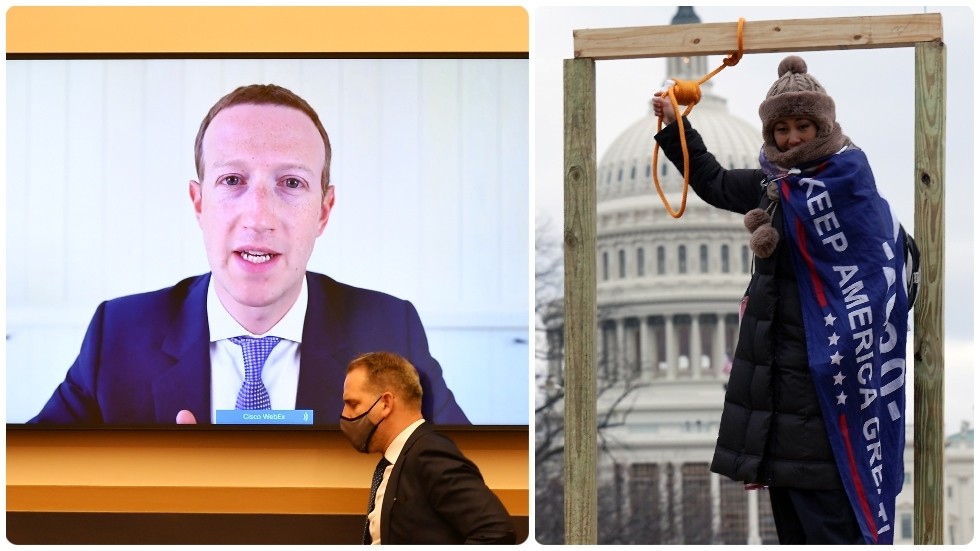 The acceptance of political censorship by social media was given a big boost after the grotesque invasion of the Capitol building by pro-Trump protesters. Some people wonder if it was merely a coincidence.

President Trump egged his diehard fans to march into the heart of US democracy and desecrate it with their craziness and violence – this is the prevailing narrative in the US media about what happened on Wednesday in Washington, DC. So kicking the ‘Orange Man’ out of all social media platforms – just like Alex Jones – is the right call, say a legion of influential people, including Michelle Obama.

Also on rt.com Trump ‘fuels insurrection’ & must be BANNED from social media, says Michelle Obama amid US press chorus calling for censorship

A choice between being an enabler of someone behind “monstrous behavior” used to “fuel insurrection” and a guardian of truth, justice and the American way is of course not a choice at all for Silicon Valley. There is even no shortage of advocates of going further: after all, the protest itself was “organized on social media,” as the New York Times was quick to point out.

There are however some skeptical voices, including model Emily Ratajkowski, who wondered whether giving Big Tech even more power than they already have is a wise idea.

“Anyone else feel like proper amount of [Capitol] police being absent/letting Trump people in/providing insane visuals of MAGA dudes on the floor of the house was wildly convenient to justifying big tech’s rollout of censorship?” she asked.

The shift makes it easier for social media to gag, for example, “leftist extremists” in the future, she predicted.

It was all about the optics. The Capitol police cleared the way. Completely paved the way for big tech censorship.

Ratajkowski is not alone in questioning the knee-jerk reaction from US society to the disgraceful scenes on Capitol Hill. For example Mexican President Andres Manuel Lopez Obrador, also known as AMLO, criticized the de-platforming of Trump, saying he didn’t like censorship.

“I don’t like anyone to be censored and for them to have their right taken away to send a message on Twitter or on Facebook,” the Mexican leader told a news conference on Thursday.

His position is quite notable, considering that his 2018 campaign for presidency was heavily undermined by fake news and social media manipulation – the things that proponents of corporate digital censorship often cite when explaining why it is necessary. AMLO won a landslide victory despite all bot-generated likes favoring his opponent.

Of course we’ve never lived in a country where so called inalienable rights are universal. But everyone will suffer from a rapidly expanding surveillance state

The US has experience of responding to national trauma by curtailing freedoms. The September 2001 terrorist attacks were so devastating for the US psyche that the nation readily accepted the Bush administration’s demand to give it much more powers to wage wars abroad and conduct surveillance at home.

Some of the most shameful pages of US history, like the 2003 invasion of Iraq on false pretenses, the CIA’s torture of terrorism suspects and unlawful spying on Muslims in New York were among the consequences of that shift.

There is no “insurrection” happening. A bunch of amped-up yahoos stormed the Capitol due to an inadequate security presence. But the false threat of “insurrection” is already being used to justify all manner of extreme censorship and soon, curtailment of civil liberties

Of course, there is no equivalence between 9/11 and the Capitol riot. One could easily argue that despite all the rhetoric about how unprecedented the Wednesday situation was, it does not merit the authoritarian response. The question about how the Trump supporters got access to Capitol building so easily needs to be answered as well, preferably with a better explanation than “of course, MAGA and cops are both white supremacists.”

Also on rt.com I’m not a conspiracy theorist, but how does a bloke in a Chewbacca bikini outwit the nation’s finest and storm the Capitol?