Capitol rioters may be charged with sedition & insurrection, all options ‘on the table’ says Justice Department 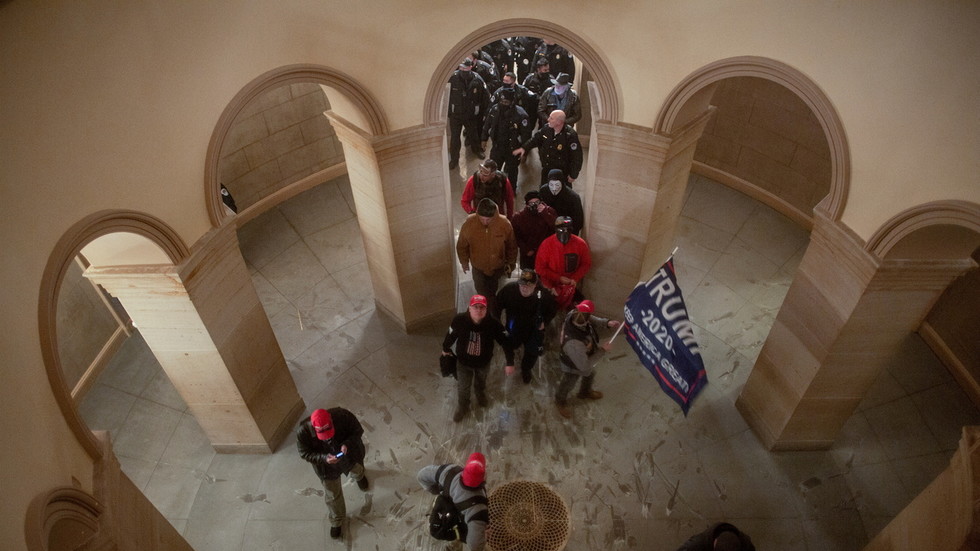 More than 90 people were arrested in connection with the storming of the US capitol, and some may face federal rioting, insurrection and sedition charges, the DOJ’s acting US attorney for Washington, DC told reporters.

Michael Sherwin, acting US attorney for the District of Columbia, said Thursday that the DOJ has already charged 40 cases in the DC Superior Court, and will bring 15 more people up on federal charges later in the day.

The charges so far include “unauthorized access and theft of property” but he said “all options were on the table” when asked if sedition or insurrection might be invoked.

One man was arrested with “military-style gun and Molotov cocktails near” the US Capitol, Sherwin said, without elaborating whether the person in question had made it inside the complex.

There are “national security concerns” about materials “stolen” from Capitol offices, Sherwin said. Asked if any Capitol Police officers had allowed the demonstrators in, he said that if there is evidence any officer was “complicit” in the breach, they would be scrutinized and charged.

On Thursday, acting Attorney General Jeffrey Rosen called the storming of the Capitol an “attack on our Government and the rule of law” and vowed everyone involved will “face the full consequences of their actions.”

Several hundred supporters of President Donald Trump breached the outer perimeter of the Capitol just as the joint session of Congress broke off to discuss objections to certifying Joe Biden’s election as president. A number of them later broke into the building, breaching the House and Senate chambers as well as several congressional offices before retreating.

The lawmakers were evacuated to nearby Fort McNair, and returned later in the evening to complete Biden’s certification, with several Republicans dropping their objections citing the unrest as the reason.