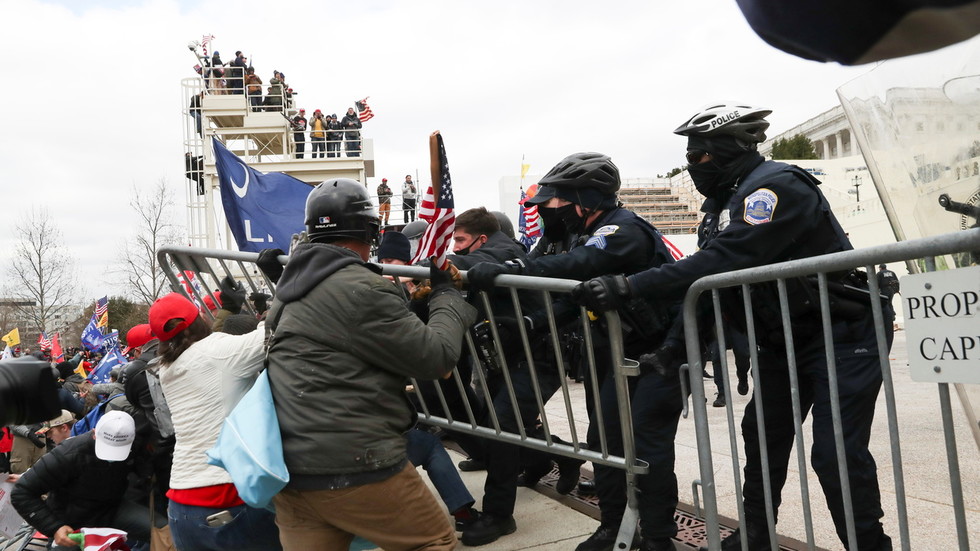 Supporters of President Donald Trump have breached the protective barricade around the US Capitol as the joint session of Congress convened to count electoral votes that would officially make Democrat Joe Biden the next president.

As Vice President Mike Pence opened the joint session of the Senate and the House of Representatives in Washington, DC on Wednesday, protesters outside pressed against the police holding the perimeter fence on Capitol Hill.

Protesters are charging toward the Captiol steps. Some tried to scale the construction structures and have been tackled by police. They want to enter the building and are making attempts at intervals. Capitol police trying to hold them back. pic.twitter.com/YflxS1miBw

Within minutes, police were in retreat and the protesters were storming the complex.

“Thousands” of people were involved, and the police appeared unable to stop them.

BREAKING: Trump supporters have breached the Capitol building, tearing down 4 layers of security fencing and are attempting to occupy the building — fighting federal police who are overrun This is the craziest thing I’ve ever seen in my life. Thousands, police can’t stop them pic.twitter.com/VVdTUwV5YN

Soldiers in uniforms and with weapons – presumably the DC National Guard that Mayor Muriel Bowser had requested earlier this week – could be seen in one of the videos.

Bearing US and Trump flags, the protesters gathered outside the westward-facing steps of the Capitol.

Protesters have torn down a barrier. Fireworks going off outside the Capitol. People in a tower telling the crowd to press forward. “Move forward and we can beat them.” Throwing things are police. Crowd pushing up chanting USA. This is unreal pic.twitter.com/FDEQu9HyPX

People working in the nearby congressional office buildings were told to evacuate “due to police activity.”

Inside, a number of Republican lawmakers have said they would object to certifying election results from half a dozen states where Trump has alleged fraud and irregularities. Minutes before opening the joint session of Congress, however, Pence said he did not believe he had the authority to unilaterally throw out electoral votes, as some hoped he might do.