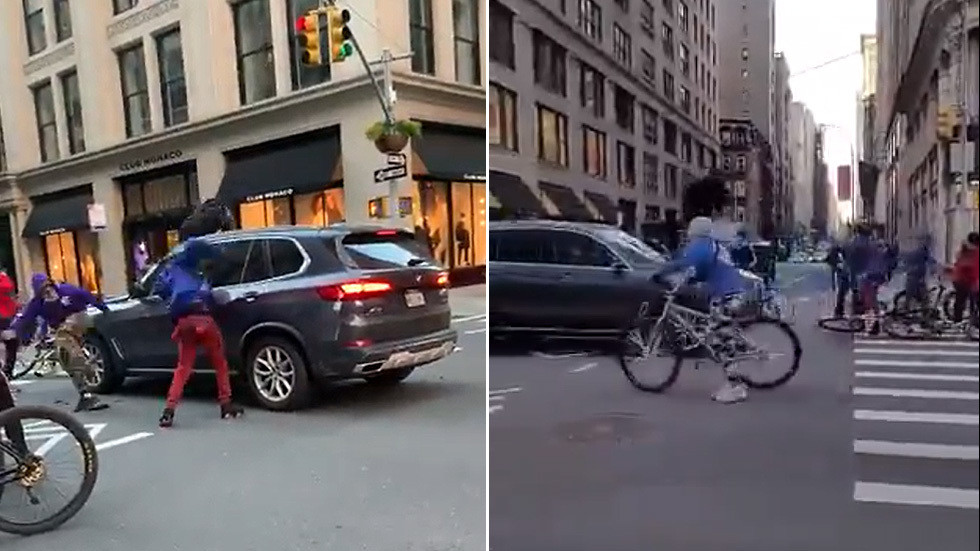 Intense footage from New York has gone viral, showing a large group of teens attacking a stopped car, then following the vehicle on bikes as it attempted to escape them.

The videos, shared around Twitter on Wednesday, show more than a dozen bike-riding teenagers surrounding an SUV with medical license plates. Some of them then proceeded to punch the car’s exterior and windows, and even hit them with their bikes. A few youngsters jumped onto the car’s hood, slamming it with their shoulders and elbows.

The incident culminated with one of the attackers jumping onto the car’s windshield, landing both his feet on the glass and instantly breaking it.

The BMW then used an opening between the teenagers and sped away. Some videos show how, shortly after that, the car stopped, and most of the attackers rode past it – yet some of the teenagers kept circling the vehicle, taunting the people inside.

East 20s, #Manhattan, New York, earlier today. ~25 – 50 mixed-age teenagers on BMX bicycles descend onto the streets. Two grab onto a car driving by to catch a ride. The driver breaks & 1 of the bikers crashes into something, resulting in a bloody lip. Next is below. #FundPolicepic.twitter.com/qXowgJG9S4

It is currently unclear what led to the incident. Neither the victims nor the assailants have been identified.

According to one of the commentators, psychologist Daniel Winarick, the incident involved more than 25 teenagers, who were initially playing around on bikes. “Two grab onto a car driving by to catch a ride,” Winarick tweets, “The driver breaks and one of the bikers crashes into something, resulting in a bloody lip.”