Russian President Vladimir Putin has written to US President-elect Joe Biden to wish him a happy new year, and expressed confidence that they would soon work together to build improved relations “in the spirit of equality.”

Putin’s congratulations are part of a series of personalized letters he has sent to other leading world heads of state and politicians, including Chinese President Xi Jinping, German Chancellor Angela Merkel, former US President George W. Bush, and the United Kingdom’s Queen Elizabeth II.

Also on rt.com Open Skies no more: US breaks with its NATO allies to pull out of Cold War-era deal that aided global security, blaming Russia

According to the Kremlin, in his message to Biden, Putin noted that “the coronavirus pandemic and other challenges the world faced in the past year have confirmed the demand for broad international cooperation.” Putin also stated that Russia and the US could do a lot more to strengthen stability and security “at regional and global levels.” 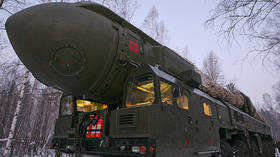 The Russian leader also wished outgoing US President Donald Trump “good health, good spirits, and prosperity,” as well as “happiness and prosperity to all US citizens.”

Former Vice President Biden will be sworn in as president on January 20, replacing Trump in the White House. During the latter’s four-year-term, the Washington-Moscow relationship has deteriorated significantly, and the Kremlin is keen to improve cooperation between the two capitals. In particular, Putin hopes the parties will see eye-to-eye on arms control issues, the cause of much disagreement in the last few years.

Since he took office in 2017, Trump has pulled the US out of international agreements such as the Intermediate-Range Nuclear Forces Treaty (INF) and the Open Skies Treaty. On February 5, a fortnight after Biden is due to take office, the New START nuclear arms reduction treaty will expire. Moscow has repeatedly asked Trump for an extension, which has been denied every time. The US president-elect has voiced his support for the deal, having attacked Trump for pulling out, but the Kremlin and the White House will need to get to work quickly to get the extension signed in time.