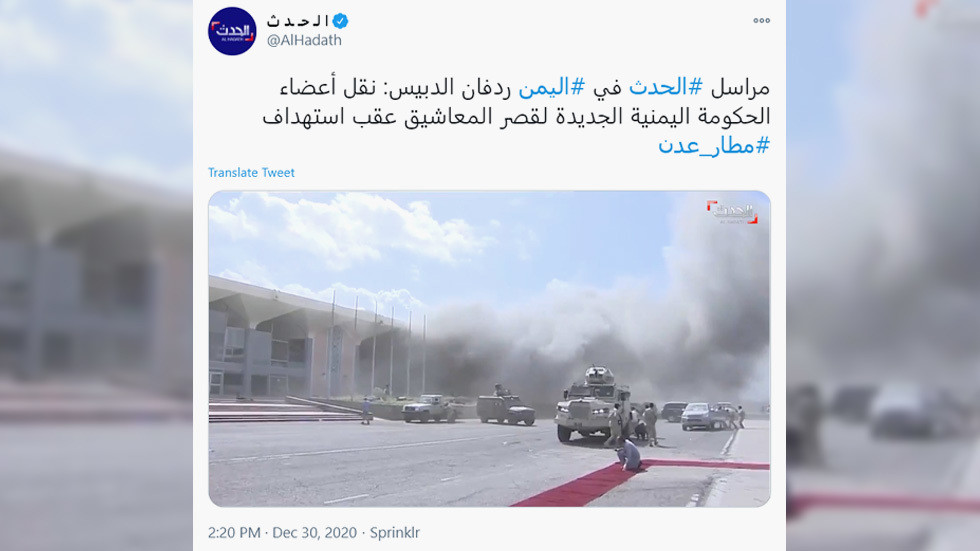 The blast reportedly killed at least five people and left dozens more injured. Footage from the Dubai-based Al-Hadath TV channel captured the incident as it was occurring. As people were peacefully leaving the plane via an airstair, a crowd gathered below it. Then suddenly a loud blast can be heard, causing the cameraman and other people at the airport to struggle to stay on their feet.

When the camera turns left towards the source of the sound, total chaos can be seen, with crowds of people running away through dark smoke, apparently left by the blast. Then, automatic gunshots are heard. At one point, Yemeni soldiers shoot their rifles up in the air to direct people away from the blast area.

Graphic photos taken after the blast show the injured with blood all over their faces.

The cabinet members, including Prime Minister Maeen Abdulmalik, were not harmed and were transferred to the city’s presidential palace, according to Reuters.

Yemen’s new government was sworn in just last Saturday. Led by Abdulmalik, it includes members of opposing factions in Yemeni politics, and is supposed to represent a national push for unity in the war-torn country. The creation of the new unity government was backed by Saudi Arabia, to the point that the cabinet members were sworn in in the Saudi capital, Riyadh, instead of Aden, Yemen’s temporary capital amid the ongoing civil war.