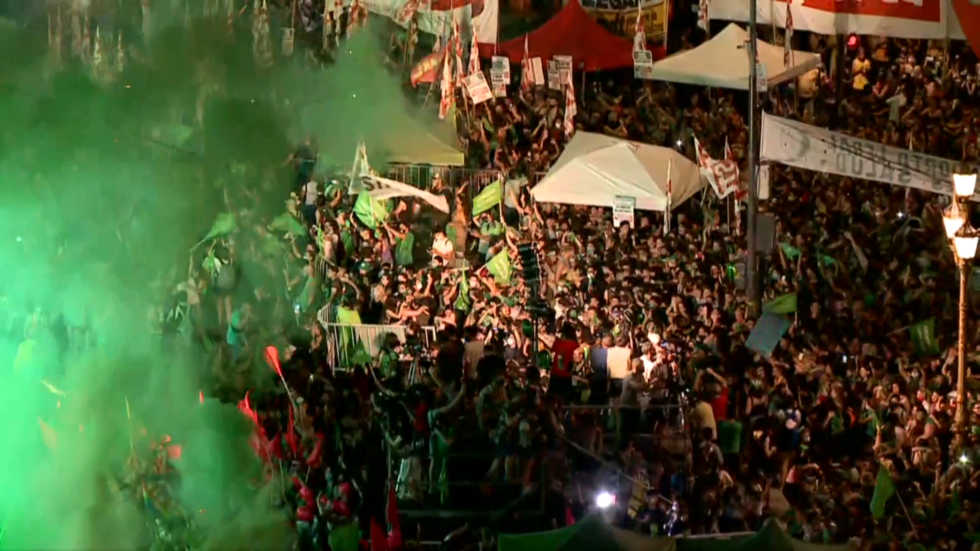 Women in Argentina, a major Catholic country, can now legally terminate pregnancies until week 14. The change was voted through by the Senate on Wednesday, triggering a wave of celebration among pro-choice demonstrators.

The lawmakers passed the bill by 38 votes to 29, with one abstention, two weeks after it was approved by the lower chamber of the parliament. For almost a century, abortions had only been legal in Argentina for pregnancies that came about as a result of a rape, or when a mother’s life was in danger.

The Senate vote was a close one, with representatives of the more religious northern provinces opposing the piece of legislation. Supporters of the so-called “green” pro-choice movement flocked in their thousands to the streets of Buenos Aires in tense anticipation of the outcome. When their victory was announced, they erupted in triumphant cries and went on to celebrate.

President Alberto Fernandez said the passage of the law made Argentina “a better society that expands women’s rights and ensures public health,” noting that he ran his campaign last year on a promise to enact the change. Until now, thousands of women in Argentina had abortions illegally each year, with a potential penalty of up to four years in jail. Dozens died annually from complications, with 35 such fatalities reported in 2018.

The change was brought in despite pressure from the Catholic Church, which has a lot of moral authority in Argentina – especially since Pope Francis, the incumbent head of the Church, hails from the country. Religious and conservative groups torpedoed a legalization attempt in 2018, when the previous version of the bill was defeated in the Senate by a margin of seven votes.

ARGENTINA JUST MADE HISTORY.Abortion is now officially legal, safe and free for all women. I have tears in my face rn,women in my country have fought for so long to obtain rights of this kind. This is a HUGE step for us,what an amazing day. EL ABORTO ES LEGAL💚#AbortoLegal2020pic.twitter.com/efcEUMMf5n

The new law mandates that the procedure must be performed within 10 days of a woman signing her consent, to prevent stalling tactics by opponents.

Other countries in the region have previously taken the same path. The Caribbean nations of Cuba and Guyana legalized abortions in 1965 and 1995 respectively, while Argentina’s neighbor Uruguay did so in 2012. On-request abortion is also legal in the French Guiana, an overseas department of the European nation.